Columbus is on the road playing Edmonton at the Rogers Place stadium on Wednesday, 1/25/2023 @ 9:30pm EST. Edmonton -371 was the opening favorite and current line is Edmonton -383.

The Columbus Blue Jackets and Ottawa Senators are heading in opposite directions this season. The Blue Jackets are in last place in the Central Division with a record of 14-30-3 with three wins in their last ten games. A 27-18-3 record and six wins in a row have propelled the Oilers to the top of the Pacific Division. As a result, the upcoming game should be a favorable one since both teams are trying to improve in their divisions.

It has been a terrible season for the Blue Jackets' defense

It has been a frustrating season for the Blue Jackets with their offense struggling and scoring just 2.57 goals per game. The offense has been led by Johnny Gaudreau, Patrik Laine, and Jack Roslovic, who have combined for 31 goals and 69 assists. Because only five skaters have 10 or more goals, opponents can eliminate the hapless offense. With 17 goals in the last five games, the Blue Jackets' defense has let them down, allowing 3.89 goals per game. Vladislav Gavrikov and Andrew Peeke have combined for 3.3 defensive point shares, but the rest of the team has been awful, allowing opponents to find open shooting opportunities.

It was a remarkable offensive performance by the Oilers

With 3.71 goals per game, the Oilers are on top of the league with 31 goals in the last six games. Connor McDavid and Leon Draisaitl have scored 68 goals and 93 assists to lead the top two lines, but the rest of the offense has performed well as well. Nugent-Hopkins, Hyman, and Kostin have combined for 55 goals and 71 assists, while Darnell Nurse and Tyson Barrie have contributed 11 goals and 43 assists from the point. Although the offense has been stellar, the defense has struggled, allowing 3.23 goals per game. Darnell Nurse and Cody Ceci have combined for 5.2 defensive points shared, but the rest of the unit has struggled, allowing opponents to find open shots at the net.

It is imperative for the Blue Jackets to win the upcoming game so they can get back on track. Unfortunately, the Oilers are having a great season and look to overwhelm the Blue Jackets on both ends of the ice. With Connor McDavid, Leon Draisaitl, and the rest of the forward unit carrying the puck into the offensive zone and creating open shots with effective puck movement, the Oilers, who average 3.71 goals per game, should find the back of the net at will against a Blue Jackets defense that allows 3.89 goals per game. In addition to limiting the Blue Jackets offense that scores only 2.57 goals per game, the Oilers should also create turnovers in the defensive zone and limit shots on the net by Darnell Nurse, Cody Ceci, and the rest of their defensive unit, which will enable Stuart Skinner to make a lot of big saves. With a dominant win on home ice, the Oilers should extend their win streak to seven games.

Our prediction: Blue Jackets -2 to Oilers 8. 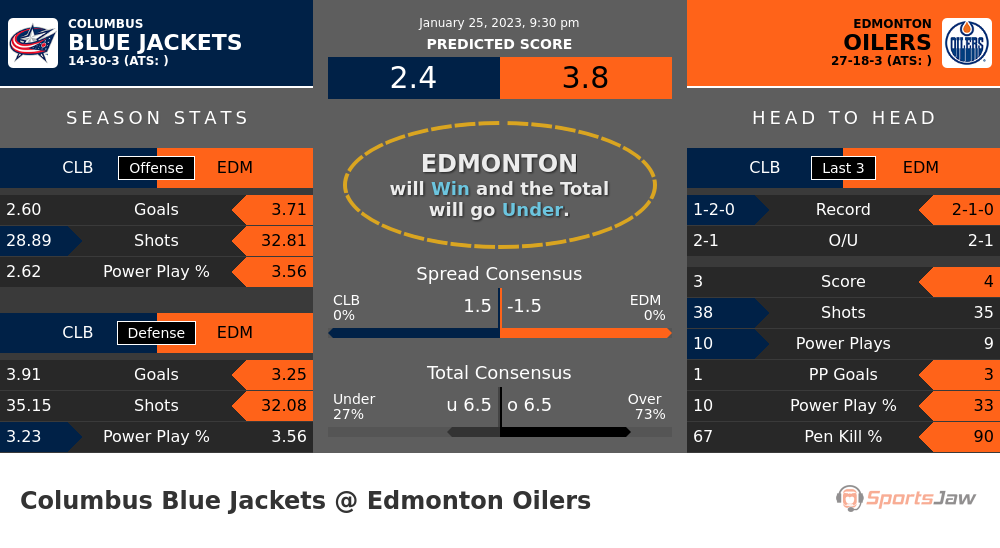 The Oilers have a slightly better offense and both teams have a compariable defense. The Oilers won more over their last 3 matchups. Adjusted score predictions based on power rankings and strength of schedule: Blue Jackets 2 to Oilers 4. 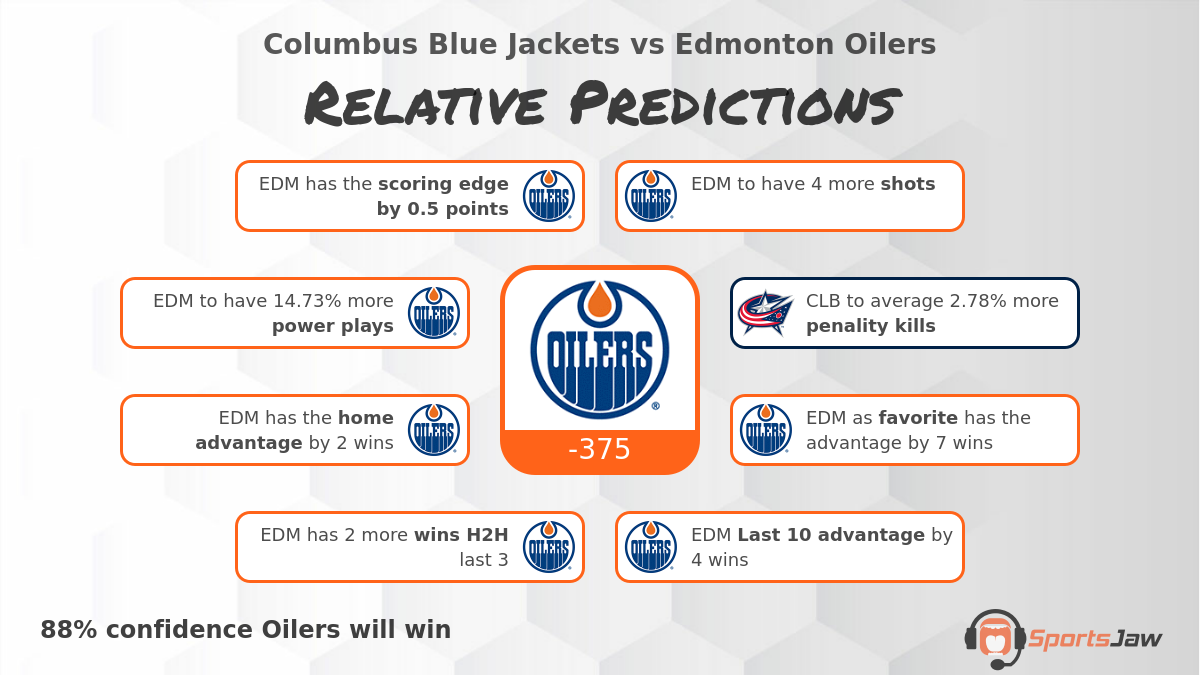 After crunching 8 relative data points, our relative predictions model has a 88% confidence Oilers will win - view the Columbus vs Edmonton infographic for details on this prediction.