It's been a terrible offensive season for the Islanders

With only 2.92 goals per game and 10 goals scored in the last five games, the Islanders are having a forgettable season. The offense has been led by Brock Nelson, Anders Lee, and Mathew Barzal with 45 goals and 72 assists. Six skaters have at least 10 goals, and opponents can easily eliminate the hapless offense. While the offense has struggled, the defense has stepped up, allowing only 2.82 goals per game. The defensive unit has been bolstered by Adam Pelech, Scott Mayfield, and Sebastian Aho, who have combined for 6.0 defensive points shares and 175 blocked shots. Ilya Sorokin has also performed well with a .922 save percentage and a 2.44 goals-against average on 1101 shots.

The Senators' offense has crumbled

The Senators are having a rough season, scoring only 2.87 goals per game with only two goals in the last two games. Brady Tkachuk and Tim Stützle lead the top line with 37 goals and 53 assists, but the rest of the offense has been ineffective. As a result, opposing defenses can eliminate the hapless offense because only six skaters have eight goals or more. Aside from the offense, the Senators' defense has also struggled, allowing 3.30 goals per game. While Jake Sanderson and Thomas Chabot have combined for 4.4 defensive point shares, the rest of the team has struggled, allowing opponents to find open shots at will. Additionally, Cam Talbot has a .903 save percentage and a 2.95 goals-against average on 754 shots.

It will be a fascinating game between two teams eager to turn their seasons around. The Islanders look to pull off the upset, but the Senators seek to control this game at home. With Brady Tkachuk, Tim Stützle, and the rest of the forward unit carrying the puck into the offensive zone and creating open shots, the Senators should create plenty of scoring chances. With Jake Sanderson and Thomas Chabot creating turnovers at the blue line and limiting shots on net, the Senators should be able to limit the Islanders offense. The Islanders average only 2.92 goals per game, enabling Cam Talbot to make some big saves. As long as the Senators perform well at home, they will win the game.

Our prediction: Islanders 3 to Senators 3. 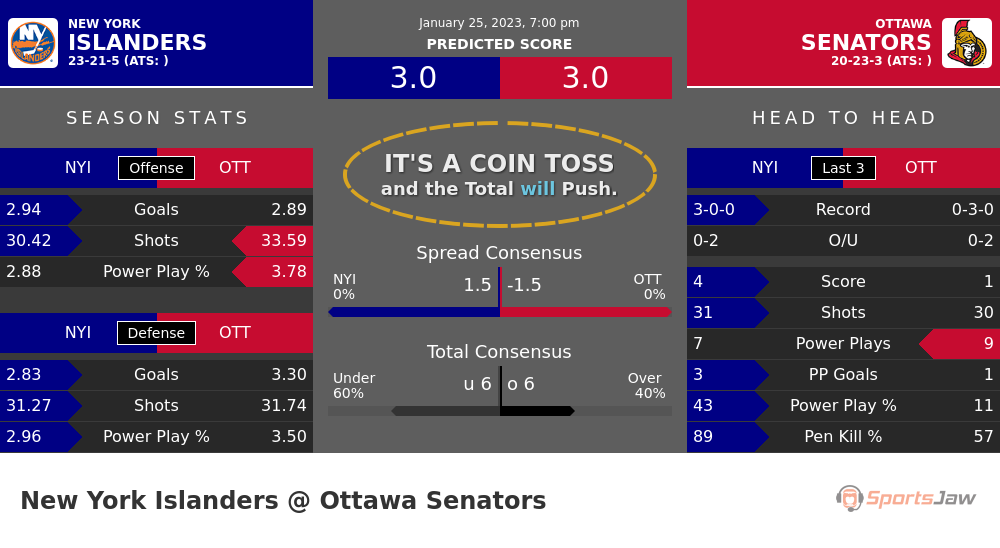 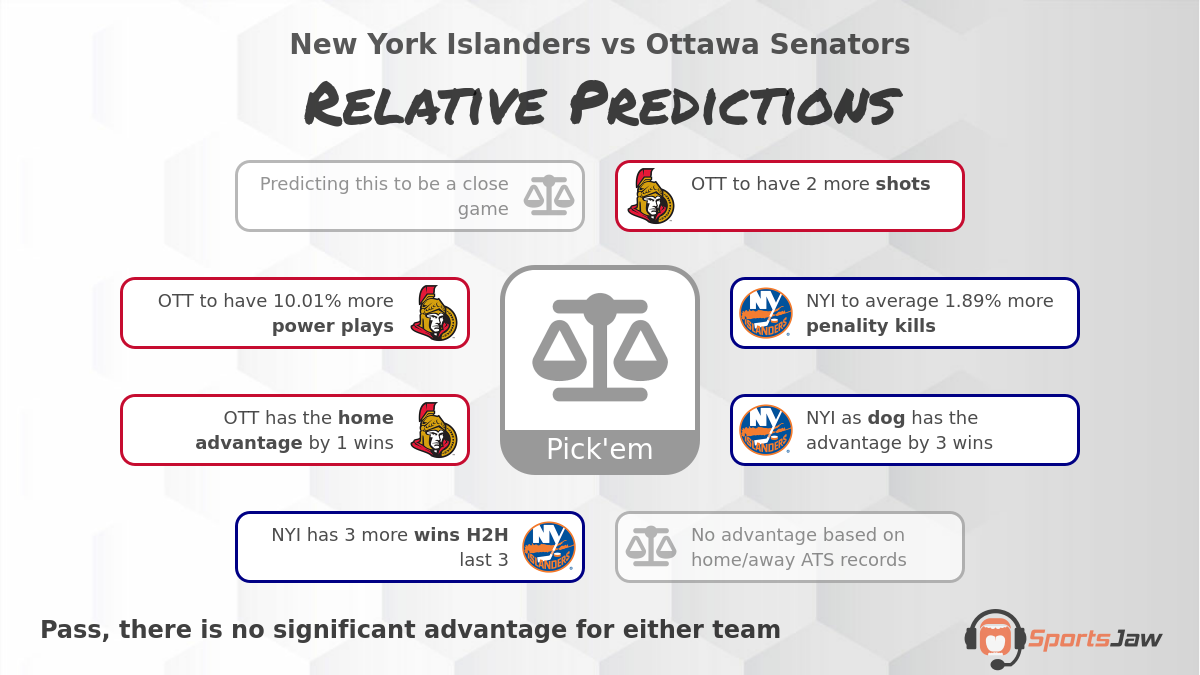 After crunching 8 data points, our relative predictions model has elected to not make a prediction on this game - view the New York vs Ottawa infographic for details.