Currently on a five-game winning streak at home, the Toronto Maple Leafs (2nd in the Atlantic Division) will face the New York Rangers (3rd in the Metropolitan Division), who have won five of their last six away games.

The Blueshirts beat the Florida Gators

The New York Rangers (26-14-7) defeated the Florida Panthers 6-2 on Monday at Madison Square Garden, their second win in the last three games (2-1-0) and seventh in the last ten (7-2-1). In the third period, the Blueshirts netted four consecutive goals, including two in a span of 14 seconds, after the visitors tied the game at 1-1 at the start of the period. Mika Zibanejad scored twice and had an assist. It was New York's first home win in three games, after finishing 3-0-2 on its previous five trips. As a result of his 33 saves on Monday, Igor Shesterkin now has a 21-8-6 record for the season with a 2.44 GAA and a .918 save percentage. His career tally against the Toronto Maple Leafs is 4-1-0 with a GAA of 1.99 and a save percentage of .938.

The Leafs defeated the Islanders

With a 5-2 victory over the New York Islanders at Scotiabank Arena on Monday, the Toronto Maple Leafs (29-11-8) extended their point run to four games (3-0-1). With a 1-0 deficit heading into the second period, the Leafs buried four goals, finishing the period with a 4-2 lead. In the final third, Auston Matthews (25 goals, 53 points) made it 5-2 when he scored twice and assisted on the other two goals. As a result, Toronto has won five matches in a row domestically. During the season, goaltender Ilya Samsonov has stopped 31 shots, improving to a 13-0-1 record on his own ice. Over the course of the current campaign, he is 15-4-2 with a 2.21 GAA and a .920 save percentage, and he has posted a 1-3-1 career record against the New York Rangers with a 3.89 GAA and a .861 save percentage.

A draw on a 3-way moneyline (+345) is the best bet for the Maple Leafs' upcoming game against the Rangers, as three of the past four meetings between the two teams have already extended beyond regulation. Additionally, based on both teams' current form, it is difficult to predict the outcome of this particular match. Please don't be afraid to stay with the visitors! Though they have struggled a bit at home lately, losing two of their last three games, the Rangers have excelled on the road, winning three of their past four games. On the other hand, the Maple Leafs have lost five of their last six games against the Blueshirts in Toronto, losing 12 of 17 overall.

Our prediction: Rangers 2 to Maple Leafs 4. 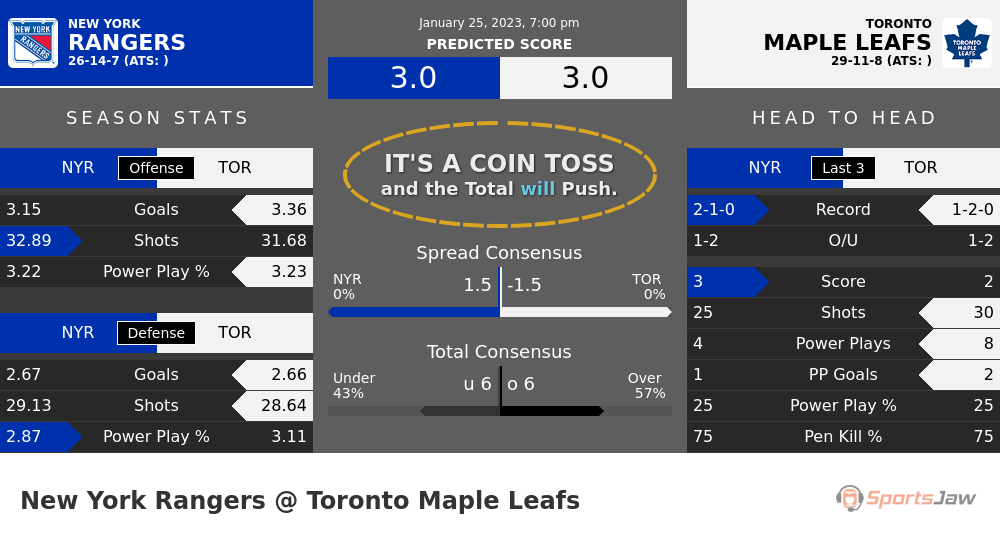 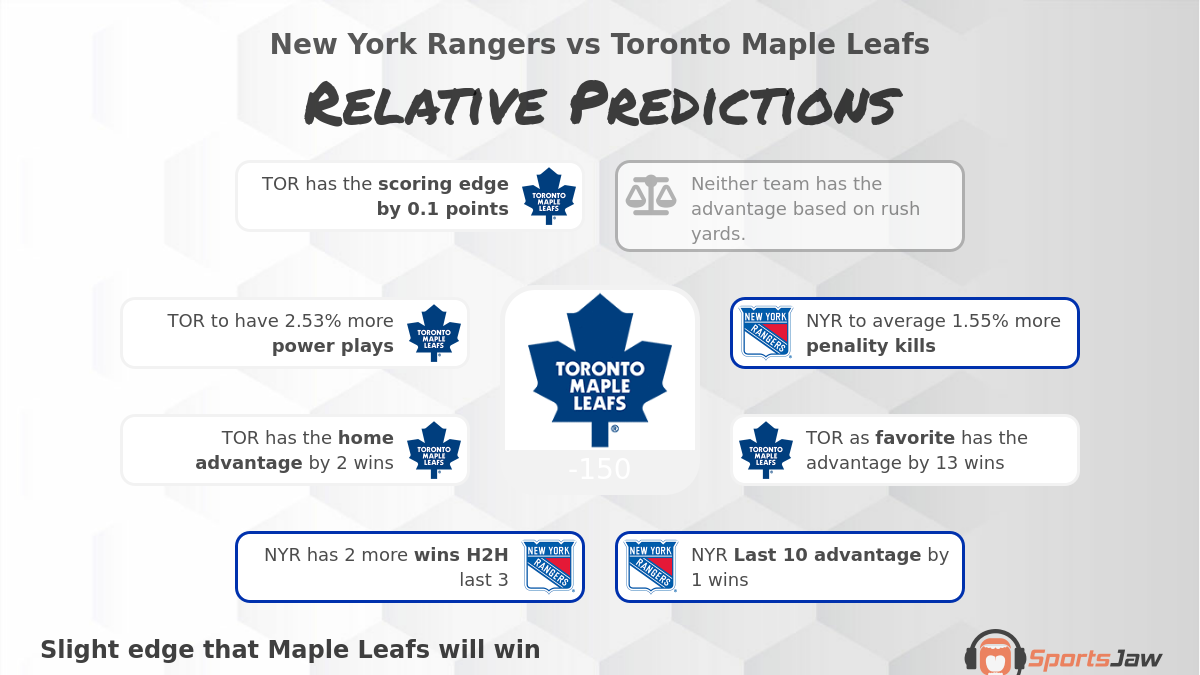 After crunching 8 data points, our relative predictions model has elected to not make a prediction on this game - view the New York vs Toronto infographic for details.