This season, the New England Patriots hold a 6-4 record. Last time the Patriots played on the gridiron, they defeated the Jets 10-3. Mac Jones completed 23 of 27 passes for 246 yards. His QB rate was 104.6 and he threw no interceptions. With 8 carries for 65 yards (8.1 yards per attempt), Damien Harris led the Patriots in rushing. With 56 yards on 6 receptions, Rhamondre Stevenson averaged 9.3 yards per catch. In the end, the New England Patriots ran the ball 26 times for 99 yards, averaging 3.8 yards per attempt. A total of 59 plays resulted in 297 yards for the game. The Patriots gave up 9 completions on 22 attempts for a total of 44 yards and a completion rate of 40.9%. In terms of stopping the run, the Patriots surrendered 59 yards on 23 attempts, averaging out to 2.6 yards per run.

For the season, the Patriots have gained 3,176 yards. As a team, New England has accumulated 95 first downs and committed 60 penalties for 473 yards. New England has scored 9 passing touchdowns and 9 rushing touchdowns. There have been 17 turnovers (10 interceptions and 7 fumbles). The team averages 115.4 yards on the ground, ranking them 17th in the league. New England Patriots average 21.3 points per game when it comes to putting the ball in the endzone.

As a team, the Minnesota Vikings average 338.5 yards per game, which ranks them 18th in the league. For the year, they have run for 1,036 yards and average 103.6 yards on the ground. Minnesota's offense has committed 436 yards of penalties on 54 infractions, which ranks 26th in football when it comes to hurting teams. Their opponents have recovered 3 fumbles and they have been able to tally 131 first downs while giving away 8 picks. Thus far this season, the Vikings have accumulated 2,349 yards through the air and held an average of 234.9 passing yards per game, ranking 10th in the league. With an average of 22.9 points scored per game, the Vikings are ranked 13th in the NFL.

In their last three games, they've allowed 14 touchdowns via the pass and 267.3 yards per game, which puts them in 31st place in the league. This season, Minnesota has allowed 1,216 rushing yards (121.6 yards/game) and 12 rushing touchdowns. This season, they have 18 takeaways (8 fumbles and 10 interceptions). With 655 plays, the Vikings defense ranks 25th in the NFL. They have conceded 231 points so far this season. With 23.1 points allowed per game, the Vikings are 19th in the league.

I like the Vikings to win here. They are going to come out strong on offense after being shut down last week. Their defense is not great, but they are solid against the run and I do not think highly of Mac Jones. Cousins will need to get going early, but I like Minnesota's offense to breakout in this one after last weeks outlier performance.

Patriots to cover, Vikings suck in night time prime time games they have a horrible record but I am betting against public money, Vegas would love for the Patriots to win.
To me this is a trick line where Vegas wants the public to bet on the Vikings being at home with a low spread, Vegas loves to trick people thru the lines and in betting you not only have to know the teams but also be able read the lines as well and spot trick lines when Vegas is baiting the public to bet one way or another, I believe this game is a prime example.
Best time to bet live is mid 3rd quarter till end of game.

As slow as my Patriots play ball, there's only 2 words.. PRIME TIME!
Curt Uncle fails again under the lights.
23-17 Patriots... YOU LIKE THAT!!!!

Luckily for the Vikings, they get a short week after Sunday's performance, and their offense (which has been solid most of the year) can't really do much worse. Although the Patriots won, the same could be said about their offense too. New England has a significantly better defense, and I think they'll win a close game that goes over. I'd guess 24-20 Patriots.

I think the Pats win this one outright in primetime against Kirk Cousins. New England has had one of the top defenses in the NFL this season and I think they will be able to do enough to slow down Minnesota. Against elite defensive teams allowing less than 17 PPG, the Vikings are just 15-32-3 ATS in those last 50 games.
Patriots +2.5

The Patriots are playing solid defense, and they will go after Cousins to sack or cause a few turnovers! The Likes have some weapons and will get in the end zone! The Pats will have a hard time scoring Points! 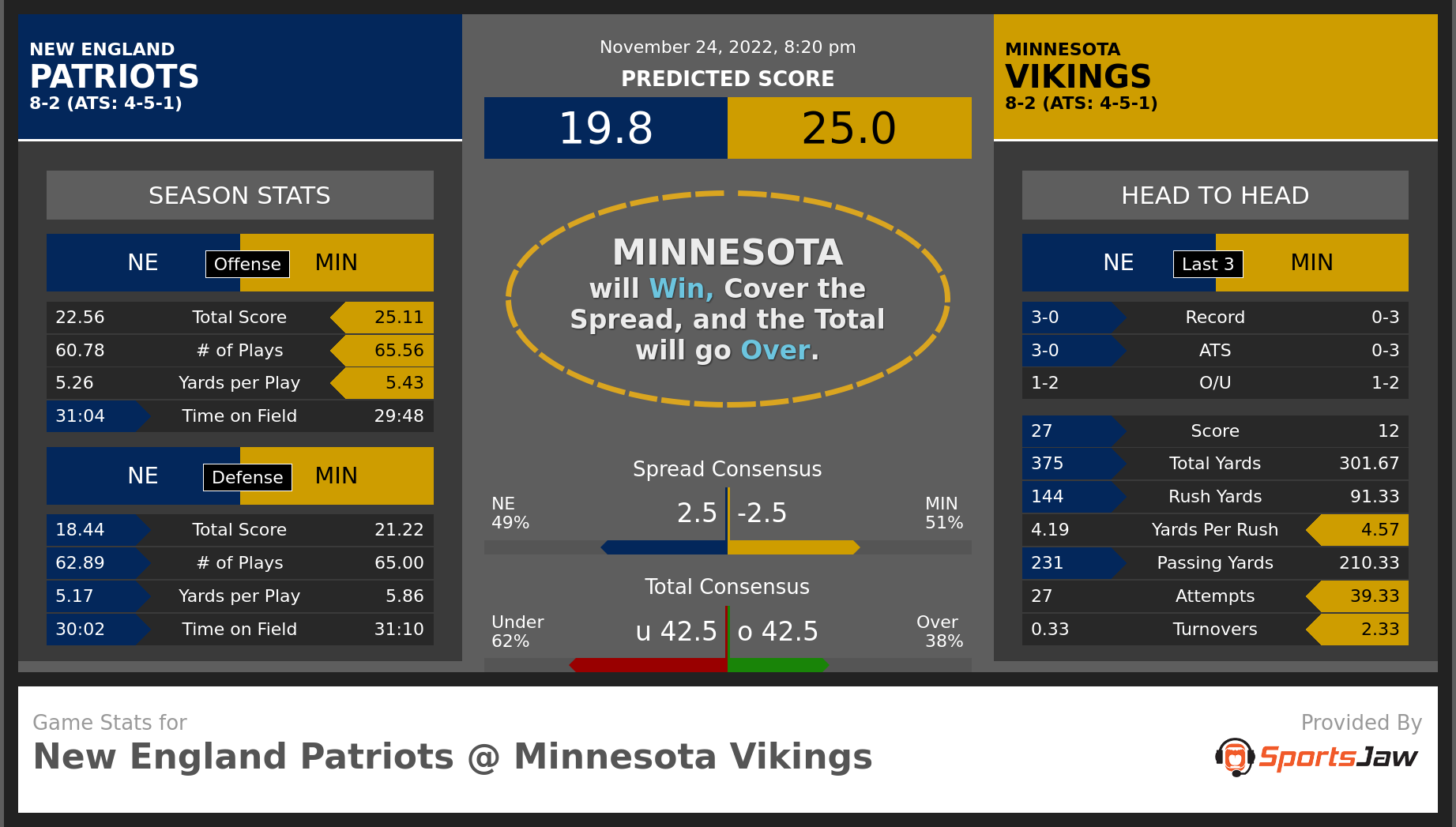 Adjusted score predictions based on power rankings and strength of schedule: Patriots 20 to Vikings 25.