This season, the New York Giants are 7-3. The Giants lost 31-18 to the Lions the last time they played on the gridiron. The Giants' Daniel Jones led the offense in rushing with 7 carries for 50 yards (7.1 yards per carry). By totaling 100 yards on 9 catches, Wan'Dale Robinson averaged 11.1 yards per reception. Daniel Jones completed 27/44 passes for 341 yards and a touchdown. With two interceptions, he had a quarterback rating of 74.1. The Giants allowed 160 yards on 37 carries, averaging 4.3 yards per carry. With 17 completions on 26 attempts for 165 yards, New York had a completion percentage of 65.4%. With 72 plays, they gained 413 yards. They rushed the ball 26 times for 89 yards, an average of 3.4 yards per carry.

This season, the Giants have accumulated 3,345 yards. The New York Giants have accumulated 96 first downs and 67 penalties for 514 yards. In terms of touchdown distribution, New York has scored 9 passing touchdowns and 13 rushing touchdowns. The team has given up the ball 11 times (5 interceptions and 6 fumbles). The team averages 157.2 yards on the ground, which is 4th in the league. The New York Giants score 20.5 points per game on average.

In the NFL, the Dallas Cowboys average 345.6 yards per game. The ground game has averaged 136.2 yards per game and totaled 1,362 yards. As a team, the Dallas offense has accumulated 540 yards of penalties on 70 infractions, which is good for 5th in the NFL. They have given up 7 interceptions, lost 2 fumbles, and gained 105 first downs. To date, the Cowboys have accumulated 2,094 yards via the pass and average 209.4 passing yards per game, ranking them 22nd in the NFL. Averaging 25.1 points per game, the Cowboys rank 7th in the league when it comes to scoring points.

They rank first in the NFL by giving up 16.7 points per game. They have given up 11 touchdowns through the air and 174.5 yards per game, ranking 1st in the NFL. In total, they have surrendered 167 points this year. For the season, Dallas has allowed 1,361 yards on the ground (136.1 yards per game) and 5 touchdowns on the ground. In the NFL, the Cowboys defense has played 641 plays, which ranks 17th. As a team, they have committed 16 turnovers (9 fumbles and 7 interceptions).

Dallas was able to pick up the big win over the Giants up in New York earlier this season and will be going for the season sweep over their rivals in this one. Since that game, the Cowboys have taken huge strides and have emerged as one of the leagues best. This offense has really clicked lately as they have averaged 39 PPG over their last three games. Their defense is allowing just 16.7 PPG and this secondary will totally take out the risk of the Giants getting explosive plays. I do not think Barkley will be able to do enough to win this one for the Giants. Cowboys dominate again.

Vegas vs 2 team tease.
IYKYK...... Cowboys wins but no cover.
Lost money on the Gwomen last week but feel they pay me back this week.
28-24 Cowboys.

I like Dallas here. They are getting healthy and they have some explosive weapons on offense that are being utilized since Dak has returned. Prescott is 8-2 ATS in his last 10 starts against the Giants and the Cowboys are 8-2 ATS in their last 10 games against the NL East.
Cowboys -9.5

The Giants seem to play well against the BOYS, I think we will see a dose of the run game for the Giants and the team from New York is tough to run against! Prescott will make some big plays downfield but the Giants keep it close 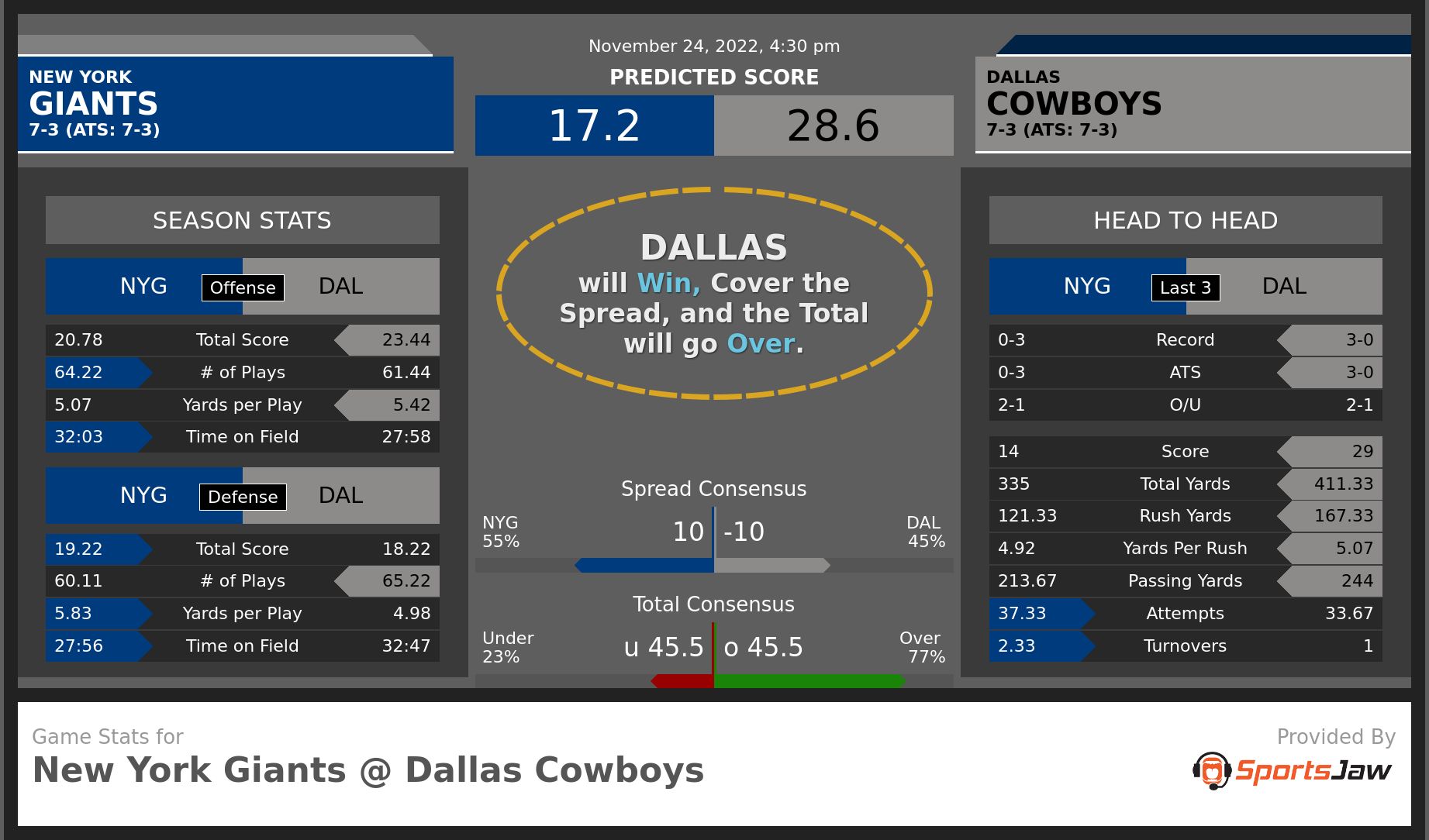 Adjusted score predictions based on power rankings and strength of schedule: Giants 17 to Cowboys 29.