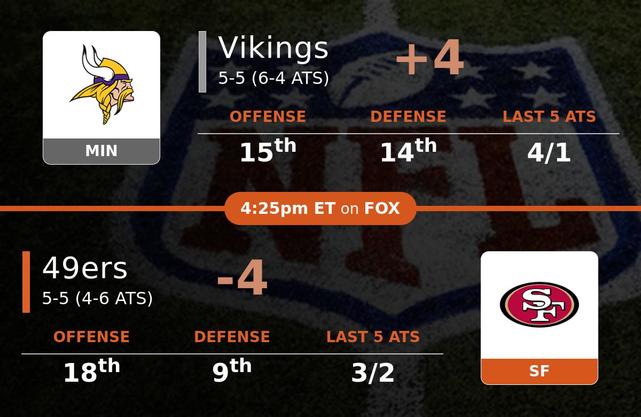 Won 60% of last 10 NFL predictions
On Sunday afternoon, the Minnesota Vikings will travel to Levi's Stadium in Santa Clara, California for an NFC battle with the San Francisco 49ers.

The San Francisco 49ers are an inspiring team to watch as they continue their winning ways. The NFC West seems like it'll be a tight race this season, with the Niners third in standing after back-to-back victories!

The 49ers were untested last weekend when they came away with a 30-10 victory over the Jaguars in Jacksonville. But it was a great match that showed the world how strong this San Francisco team actually is.

The Vikings have been steadily climbing up the NFC North standings in recent weeks, beginning with a win over their division rival Green Bay Packers.The Vikings are currently right on the tail of the division-leading Green Bay Packers, who have a two-game lead over Minnesota. Not just that but the Vikings last game.

Although the Vikings have shown over the past couple of games that they can compete with other teams in their division, there is still a lot of work to be done. I think that the San Francisco 49ers have a better chance at winning this one.

Won 80% of last 10 NFL predictions
The Vikings have won two games in a row and those wins were against some good NFL teams. They just beat the Packers 34-31. It was a close game from start to finish and Minnesota won on a game winning field goal. The Vikings were good on third downs and took care of the football. The 49ers are starting to look like the NFC Champ Niners of 2019. Jimmy G is playing confident and the team has had two solid wins in a row. SF just beat the Jaguars 30-10. They owned time of possession and took advantage of penalties. San Francisco are 10-1 SU in their last 11 games when playing at home against Minnesota. 49ers win 27-20.
Read More
$500 | SF -4
@maxh

Vikings quarterback Kirk Cousins has been inconsistent, but he has had moments where he cannot be stopped. I do not expect him to be stopped this week and beat the 49ers on the road in close fashion. Bet on the Vikings.

Won 60% of last 10 NFL predictions
This will be a fun game between two teams that can't afford too many more losses this season if they want to play in the postseason. Both teams have been looking good the last few weeks as well.

The 49ers have also won 2 straight. They beat Jacksonville last week but defeated the much mightier LA Rams the week prior.

This should be a close game, and I'm not confident betting the spread either way. In the end, I like how Garoppolo and the niners have been playing as of late, and I like them to pick up a narrow victory here.
Read More
$100 | SF -200
@chilldeej

The Niners are at home against the Vikings and are favored at -3. Both teams are 5-5, and coming off wins last week. For the Vikings, QB Kirk Cousins has played an efficient year of football, and with a better defense, the Vikings would have a much better record. On the year he has thrown for 2,775 yards, 21 TD’s, and 2 INT’s. He has also thrown for 4 300+ yards games. But the Vikings' problems are on defense, especially on the road. They give up 28 points per game while just on the road. And they allow 378 total yards per game overall. The Niners will put up points in this matchup. Playing at home with all available weapons. Kittles, Aiyuk, Samuel, and Mitchell. Plus a Niner defense that isn't what it was last year, but still get up for big games at home. The Niners will cover and win the game in this matchup.

split down the middle on Covers.com

The Levi's Stadium has an open roof so weather should be considered for today's game. It will be Sunny with 1% cloud cover and a 0% chance for rain. The temperature is 70° with 42% humidity and winds at 5 mph NNW.