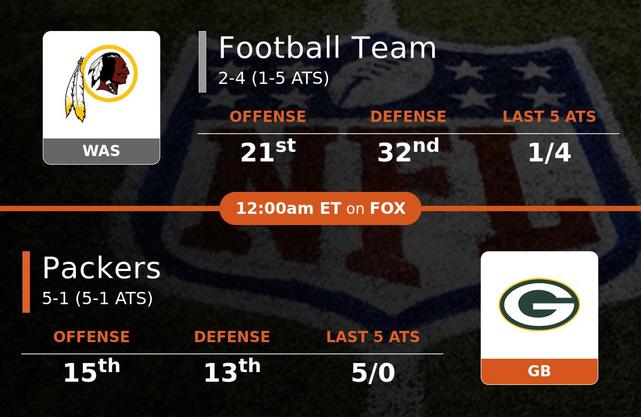 The Packers are looking for their 6th straight victory on Sunday when they host the Washington Football team in a week 7 NFL contest from Lambeau Field. While I definitely think Green Bay wins this game, they are favored by too many points. Washington is a better team than they have shown so far this season defensively, and I think HC Ron Rivera will have them playing closer to their full potential. Washington has allowed 30 or more points in four consecutive games, and teams that have allowed 30+ points in three or more consecutive games in week 6 or later are 37-19 ATS. The Packers are just 9-22 ATS when facing a terrible defense that is allowing 6 or more yards per play on the season. Green Bay will be caught looking ahead and I like Washington +8.5.
Read More
$250 | WAS +8.5
@GiSharkiors49

The Washington Football team has lost by double digits for two games in a row and this team gives up around 30 plus points a game. Their two wins were against below average teams. Last week, they lost to the Chiefs 31-13. WFT actually led at halftime, but then got shut out 21-0 in the second half. They need to work on more production on offense and less incomplete passes. The Packers have been scoring with ease and playing solid defense. They just had a somewhat close 24-14 win over the Bears. Green Bay took care of the ball and did just enough to win in the clutch moments. Green Bay are 5-0 ATS in their last 5 games. Packers win 31-16.
Read More
$500 | GB -8.5
@FUHQ

Packers about to get their stats padded to equal out after that week 1 loss…
Read More
$500 | GB -8.5
@JohnnyLikesCash

Going with the over between Washington and Green Bay. Washington's defense has struggled this year allowing 31 PPG which is the highest in the NFL this season. 65% of the bets are on the under but 65% of the handle is on the over. In the last 5 starts that Taylor Heinecke has made, the over is 4-1. Out of the last 10 home games for the Packers, the over is 6-4. I think both teams will put up some points here and Washington will struggle to slow down Green Bay.

Ever since week 1, the Packers have been a cash machine for bettors going 5-0 both straight-up and against the spread. Washington has the league's worst pass defense by allowing a whopping 309.5 yards per game. Patrick Mahomes was the first quarterback in the past month not to throw for four touchdowns against Washington and he still carved up the nameless ones for 397 yards. What do you think Aaron Rodgers is going to do?

Rodgers has been close to perfect on paper since that New Orleans game, and Washington's defense shockingly ranks 29th in DVOA. They just don't seem to have it this year, and it doesn't help that the offense has been hit hard by injuries while quarterback Taylor Heinicke has faded.

I've got the Packers by double digits in this one.

Won 70% of last 10 NFL predictions
Washington’s once highly though of defense now ranks worst in the NFL. They are allowing opponents to average more than 400 YPG and 30 PPG. Not only is their defense out, WFT also has two starting Oline out for this match as well. Look for the Packers defense to make Heinicke uncomfortable and force a lot of bad throws. Aaron Rodgers will look to light up the secondary as this WFT defense allows an average of over 300 YPG in the air. Green Bay will win this one with ease. Lock of the Week, GB -8
Read More
$100 | GB -8.5
$100 | GB -425
@LeBronStopper

Won 80% of last 10 NFL predictions
The Washington defense is a shell of its last year’s greatness. They are giving up over 30 points per game and were outplayed by the Chiefs at home. They come into Green Bay to face the streaking Packers who haven’t lost since Week 1. Aaron Rodgers and Davante Adams rediscovered their chemistry and Aaron Jones is proving to be a steady running back. It’s difficult to defeat the Packers at Lambeau Field and I’m not banking on an upset by Washington. Green Bay will take this easy victory, even if offensive linemen Dennis Kelly and Josh Myers are out. Take the over because Washington will score, but not enough to defeat the Packers.
Read More
$100 | GB -425
$100 | OVER 48
@chilldeej

The Packers are at home as the favorite at -7.5. Green Bay is one of the toughest places to play this time of the year. Also, Washington gives up 31 points per game ranking dead last, and they give up 423 yards per game. 309 through the air, and 113 yards on the ground. It's surprising the Packers are not more of a favorite.in this matchup, but have lacked consistency on offense. The 5-1 Packers could have very easily been 3-3 with wins from both the Bengals and Niners within 3 points. Aaron Rodgers has 12 TD’s and 3 INT’s and only 2 of those have gone to Davante Adams, but the game plan of incorporating RB Aaron Jones has paid off and keeps defenses unable to key in on the Packers passing attack and lack of depth outside. Both teams will give up points in a close game where the Aaron Rodgers/ Davante Adams connections will show out. He has yet to have a big game scoring wise and Washington at home is a set up for that.

Edit it or change ur pick
@CowboysFan3434

Won 60% of last 10 NFL predictions
The packers have been rolling since their week 1 loss to the Saints, and many believe it was Aaron Rogers trying to prove a point.

On the other side the “redskins” have been getting their butts kicked, with one of their only wins coming to a weak Giants team. I expect this game to be over by halftime.

split down the middle on Covers.com

The Lambeau Field has an open roof so weather should be considered for today's game. It will be Partly Cloudy with 33% cloud cover and a 0% chance for rain. The temperature is 50° with 54% humidity and winds at 9 mph NE.