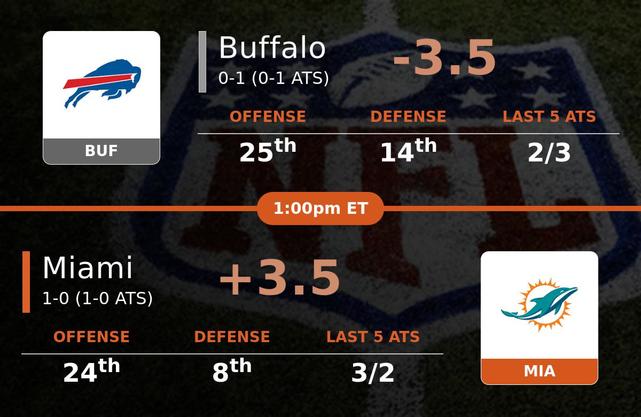 Look for Buff to ‘air’ some dirty laundry today. 2-3 air TD’s. Have to get the bad taste of week 1 out of their system.

The Bills will be looking to rebound after a disappointing opener against the Steelers in week 1. The Dolphins will look to improve to a 2-0 start after an impressive win on the road in New England in week 1.

The public is all over Buffalo here and expects them to bounce back in a major way this week, but I think they are slightly overrated and I think the Dolphins are a little bit underrated. This game is going to be a tight one for 60 minutes and I really like the home dog in this one. Even if the Bills come out with a win I think Miami will cover the 3.5. Their defense will be able to give Josh Allen some trouble and I think will be seeing a lower scoring game. It is tough to go against Miami at home as an underdog.

Miami is down brother!!!!! Smh
@SFDan

In Week 1, as a 6.5-point home favorite, Buffalo was upset by a Steelers team that deserved more respect from the home side and oddsmakers alike. The Dolphins, meanwhile, went to Foxborough as three-point road 'dogs and knocked off the divisional-rival New England Patriots. While neither result was truly surprising, I expect the script to flip this week with the Bills evening both their and Miami's record at 1-1 with a decisive road victory. Buffalo had huge expectations coming into the season, got a little early dose of reality, and will use that to right the ship today.

But at the very least, this sets up to be a hard fought game and Miami should be able to keep this close...I think the Dolphins have the talent on the back end to slow down Buffalo's passing attack, and the Bills apparently decided that running the ball is for suckers against Pittsburgh. If Miami can get pressure on Josh Allen without a ton of blitzing and avoid big mistakes, the Dolphins could win this game outright. But even if they don't, Miami should keep it close and the difference for me on this pick is the "hook" on this line.

In Week 1, the Bills had a good first half against the Pittsburgh Steelers and were up 10-0 at the half. From there, the defense collapsed and Josh Allen couldn't get anything done in the passing game. Buffalo had the yardage, they just couldn't complete the efficiency. The Dolphins had a back and forth game against the New England Patriots and won 17-16. Miami did just enough to win and getting a few Patriots turnovers helped.

Last season, the Bills owned the Dolphins and Stefon Diggs was a key factor in those games. With that confidence, Allen wants to get his elite offense going again. Dolphins quarterback Tua Tagovailoa needs to play a clean game and the rushing offense will need to get going as a backup of production. Buffalo are 9-3 ATS in their last 12 games and Buffalo are 5-0 SU in their last 5 games against Miami. Bills win 35-20.
Read More
$500 | BUF -3.5
@Shoulderfat

It appears that a lot of bettors are predicting that the Bills rebound in major fashion against Miami. The line for this game opened with Buffalo as the -3 point road favorite. Since then it has crept up to 3.5. In 2020, the Bills took a step back defensively. While allowing 23 points to Pittsburgh is not a terrible performance, I think there is offensive opportunities for Miami in week 2. Josh Allen was frustrated all game against the Steelers. And although Miami is not on the same level as the Steelers, this is no easy task for Allen and the Bills.

In week 1, the Dolphins pulled out a slugfest of a victory against New England. This week they will need more than 17 points if they want to upset the Bills. Question marks remain on Tua Tagovailoa as the quarterback as he will need to improve as a passer in the league.

In an upset, I am taking the Dolphins on the moneyline. I see the Dolphins making a big statement on where they stand in the AFC. Dolphins +161 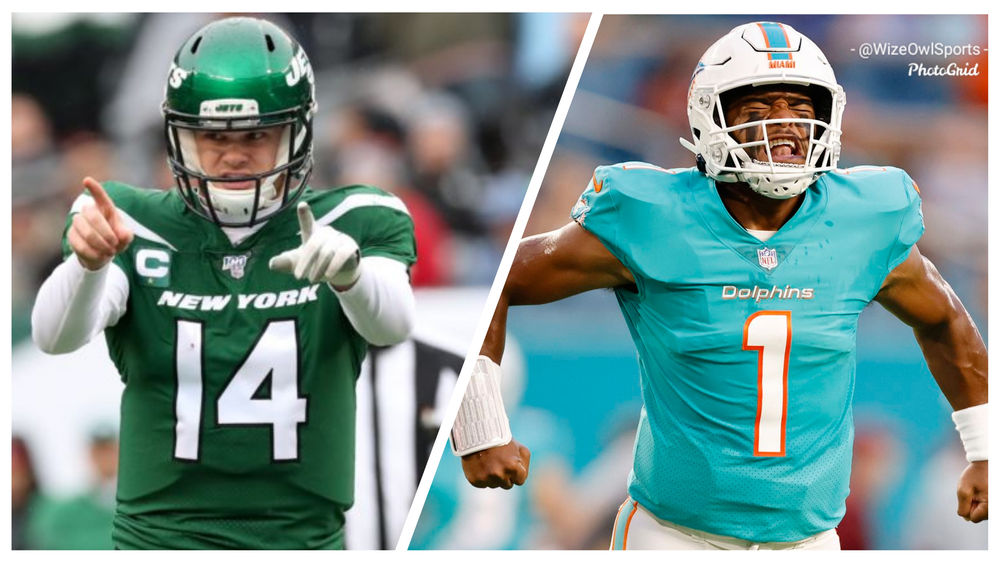 Our power rankings composite framework makes the Buffalo Bills 1.5-2.5 points better than the Miami Dolphins on a neutral field, but we estimate Miami deserves a 1.5 point adjustment for hosting the affair. Thus, we see the Bills -1 as a fair line.

Beyond that, we observe a ton of historical context that points to the underdog cover from this spot (fading underachieving division favorites, backing division dogs early in the year, siding with dogs off disappointing offensive showings, and more). Our full rationale is detailed here:

It's simple as this, we're going back to my old logic. We're betting betting the better quarterback in this matchup. Josh Allen is far more superior to Tua Tagovailoa. I'm not putting much stock into the Bill's breakdown last week considering the Steelers defense looked like the best in the league (tied with the Rams) in my analysis. The Dolphins squeezed one out in New England due to a late game fumble. I haven't seen anything spectacular out of Tua since he came in the league. He's a game manager at best. This is a huge game for the Bills early in the season in terms of the AFC East. Both Defenses are very good and I think they almost cancel out. Give me the Bills but I am buying them up to 2.5 (-155) which is pretty steep but much needed as this could be a close game.
Read More
$100 | BUF -3.5
@LeBronStopper

Are Buffalo’s scoring problems against the Pittsburgh Steelers an aberration or an indication of bigger concerns? It’s surprising that Josh Allen, Zack Moss, Cole Beasley, Stefon Diggs, Gabriel Davis, and Emmanuel Sanders scored just 16 points. They now go to Miami to avoid an 0-2 hole against a Dolphins squad that sneaked past the New England Patriots.

To say the least, the Dolphins did enough to win over New England. The Patriots also shot themselves in the foot by committing eight penalties for 84 yards. Tua Tagovailoa had a modest game with one touchdown pass to Jaylen Waddle and another one-yard touchdown run. Aside from those scores, there was nothing eye popping in their game.

Like last season, the Dolphins will rely on solid defense, especially on the secondary with Jason McCourty and Xavien Howard. McCourty’s familiarity with New England’s system may be a key factor in Miami’s win, but they’re better off neutralizing the Patriots’ preference for short to intermediate passing.

However, Josh Allen will swing for the fences with every throw and Miami’s defensive backs must be ready. But Buffalo’s loaded receiving corps will overwhelm the Dolphins secondary to claim the victory. As for the Bills defense, making the passing windows tight will be enough to disrupt Tua’s game.

Betting Prediction: Miami will Win, Cover the Spread, and the Total will go Under.

Vegas has been overvaluing the Bills and been expecting too much from the Dolphins lately.

The Hard Rock Stadium has an open roof so weather should be considered for today's game. It will be Partly Cloudy with 40% cloud cover and a 17% chance for rain. The temperature is 89° with 61% humidity and winds at 5 mph E.