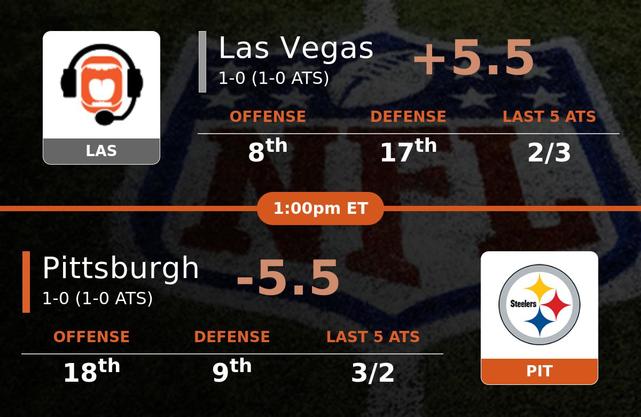 Pittsburgh is coming off an impressive performance where they were totally in control on defense and gave Josh Allen and the Bills fits. The Raiders played Monday night at home and had a wild finish with their victory over Baltimore.

I like the Steelers in this one to take care of a Vegas team that didn't look all too great until late in their game on Monday night. Coming off a win like that on a short week and having to travel to Pittsburgh isn't ideal. The Steelers are playing their first home game this year and should have a great environment this afternoon. In their last 15 games coming off a win, the Steelers are 10-4-1 ATS in their next game. I think they take care of business at home today against Las Vegas.

The visiting Las Vegas Raiders are coming off an emotional opening week victory against the Steelers. Traveling across the country on short rest is never a great recipe for a victory. This line has moved towards Pittsburgh throughout the week. In 2020, the Raiders were ranked 2nd in pace and 11th in offensive efficiency. In 2020 they were 30th in points allowed per play.

The Pittsburgh Steelers are riding high off a big win over the Buffalo Bills. The Steelers frustrated quarterback Josh Allen all afternoon and will look to do the same against the Raiders. Pittsburg should have no problem getting to the quarterback as Las Vegas struggles to slow down opponents pass rush. In 2020, Pittsburgh was an average offense in terms of points per play. Their week two matchup should allow for a big performance.

I think bettors are not sold on Las Vegas and the spread is sitting a full point too high. However, I don't like betting on road teams with short rest. I do think the over at 47 is great bet in this matchup.
Read More
$100 | OVER 46.5
@muterovince

The Steelers will be once again put to test as to whether their strong defence can withstand the force of the Los Angeles. The last time they played, the Steelers halted the tornado of high-scoring Bulls and this match will be a test of whether they can manage to replicate their last game's exploits.

The offense of the two teams is far from perfect and thus there is every chance that this could be a low-scoring game. Also, expect the game to be less offensive with both teams looking to limit the other. Despite the apparent struggles, I'm backing the Steelers to come out on top in this one though it will be a hard-fought victory.
Read More
$100 | PIT -245
@ICar

The Las Vegas Raiders won a thriller on the first episode of Monday Night Football this year. Coming out of that game, however, there are a lot of reasons Raiders fans might be concerned with their team. The most glaring problem is their offensive line. With Rodney Hudson gone and Richie Incognito expected to miss this game as well, the Raiders have significant problems up front. Rookie right tackle Alex Leatherwood had a bad Week 1 too, which included a false start on the goal line in OT. These are problems Vegas will need to fix.

On the plus side for the Raiders, Maxx Crosby and Carl Nassib look like a pair of absolute monsters that should worry any offence.

A lot has been made about the changing offence in Pittsburgh with rookie running back Najee Harris now a focal point. Their offence might struggle a little against a possibly underrated Las Vegas defence. This is still a team led by Mike Tomlin and Ben Roethlisberger, however, and that should not be downplayed.

The Raiders are a team with holes and Mike Tomlin is a coach who knows how to exploit those. I'm expecting the Steelers to win big here.
Read More
$250 | PIT -5.5
@MR.BIGGS

Both teams coming off big wins,Great game by the Raiders on Monday night,Now the young o-line must contain JJ Watt and the Steelers Pass rush it could be tough with a banged up Jacobs at running Back and a young injured o-line its tough to win in Steeler Country.The Raiders will have to do a better job of tackling,if somehow they can run the ball a bit to give their def.a break.Big Ben is not the same as he use to be but he still has weapons.The key for the steelers is their def.if they can muster a few turnovers and gain some solid field possesion will help the Steelers OFF. Crosby at defensive end for the Raiders will get after Big Ben and help keep this game close! TAKE THE RAIDERS+6
Read More
$250 | LAS +5.5
@LeBronStopper

Defense will be the name of the game for the Pittsburgh Steelers. That’s how they pulled out the road victory against a high-scoring offense like Buffalo. The Steelers defensive front punished and outplayed the Bills offensive line and limited their opponents to 16 points. It’s an unorthodox way of winning but it works as long as they score enough points.

Meanwhile, Pittsburgh’s running game still lags behind after tallying 85 yards against the Bills. Najee Harris can still bounce back from his pedestrian NFL debut now that he can feed off the energy of the Heinz Field crowd.

On the other hand, it’s hard to see Derek Carr having another 400-yard performance against a secondary that has Joe Haden and Minkah Fitzpatrick. But he will get his completions given that Darren Waller is such a big target.

Both offensive lines manifested some loopholes during their respective season openers and the same woes will persist in this game. When that happens, the game will be a low-scoring affair which suits Pittsburgh’s preference. But Ben Roethlisberger will do enough to give the Steelers a close victory.

Betting Prediction: Pittsburgh will Win, Cover the Spread, and the Total will go Under.

Vegas has been overvaluing the Raiders and been expecting too much from the Steelers lately.

The Heinz Field has an open roof so weather should be considered for today's game. It will be Sunny with 1% cloud cover and a 0% chance for rain. The temperature is 81° with 50% humidity and winds at 4 mph ENE.