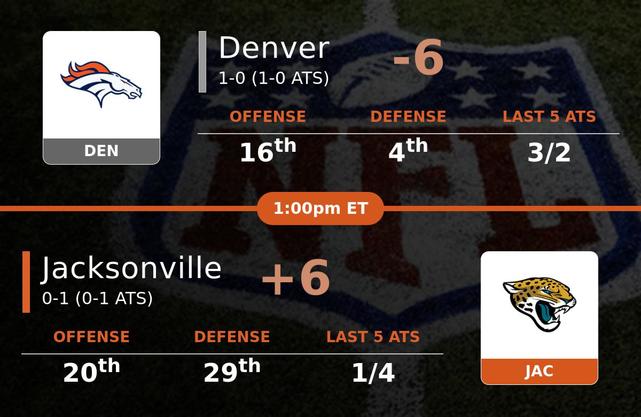 This is my upset for the week.

The Denver Broncos just took down the New York Giants with a double-digit road victory. So why are they laying just six points in another road game against the Jacksonville Jaguars? After all, Jacksonville has lost 16 straight games and was just smashed by a Texans team in disarray.

The Jaguars already have the feeling of a team coming apart at the seams after only one week and Urban Meyer is beginning to look like a bad experiment. Trevor Lawrence could be great one day but he's still green and doesn't have a lot of help on the O-line or at receiver.

Denver did lose receiver Jerry Jeudy to an ankle injury in Week 1, but that pass-catching corps is quite deep so nothing the fret about there IMO.

I predict it's going to be another long season for the Jaguars, Denver picks up the W today and covers the number.

This matchup opened with the Broncos as -2.5 point road favorites but has moved up to -6. Denver will benefit from playing two bad opponents to open the season. In week one they covered the spread with a 14 point victory. In 2020, despite their poor record, Denver was the 6th best defense in opponents points/play. The issue has always been their offense. It still remains to be seen how much of a boost Teddy Bridgewater can provide.

Jacksonville pinned its hopes on rookie QB Trevor Lawrence. While there is no reason to panic after 1 week. Many expected Lawrence to pull out a victory against the Texans. It appears not much improvement has taken place defensively for the Jaguars. In 2020 they were ranked 25th in defensive efficiency.

My model shows this game finishing closer to the opening spread. I'm predicting this to be a closer game for Denver in week 2 and am taking Jags +6.
Read More
$100 | JAC +6
@LeBronStopper

Trevor Lawrence had some good moments and he also made some head-scratching decisions. He will lock up the starting quarterback position for years, but the Jaguars must invest in upgrading their roster further. However, did Houston’s defense made it easy to Lawrence to complete good throws? That might not be the case against Denver which limited the New York Giants to 14 points despite a stellar effort from Sterling Sheppard.

Lawrence might get more frustrated or fooled by the likes of Kyle Fuller and Justin Simmons in the Broncos secondary. Then there’s Von Miller who had a feast against the Giants offensive line in Week 1. The Jaguars O-Line is a sliver of an upgrade which gives Miller another easy pass. How will Lawrence react knowing that his line cannot handle Miller or Mike Purcell?

However, the Broncos pass rush must pick their timing well because Lawrence has an arm that can get the long gain to an open receiver. Meanwhile, Jerry Jeudy not playing is some sort of consolation for Jacksonville. But they must generate more pressure than what they produced against Houston. Otherwise, Teddy Bridgewater can burn them with passes to Noah Fant or KJ Hamler. Melvin Gordon will get his share of rushing yards too.

Betting Prediction: Denver will Win, Cover the Spread, and the Total will go Over.

The TIAA Bank Field has an open roof so weather should be considered for today's game. It will be Cloudy with 84% cloud cover and a 18% chance for rain. The temperature is 79° with 90% humidity and winds at 7 mph E.
@CaptainObvious

Vegas has been overvaluing the Broncos and been expecting too much from the Jaguars lately.