Recap for November 10th, 2019, 12:00PM ET
BETTING PREVIEW AND PREDICTION Detroit Lions 3-4-1 (4-4 ATS) are playing Chicago Bears 3-5 (2-6 ATS) on Nov 10, 2019, 1:00pm ET at Soldier Field. The Bears opened at -3.5 in Vegas and the current line is CHI -2.5. Something has to give: Bad Defense vs Bad Offense The battle to rise from the ashes of the NFC North will take place Sunday when the Chicago Bears host the Detroit Lions at Soldier Field. Both teams got off to promising starts to the season only to falter in recent weeks. A playoff spot is a long shot for both teams with Green Bay and Minnesota playing Championship-caliber football but in this rivalry game, expect both teams to come out and play with some grit and desperation. Matthew Stafford is quietly playing the best football of his career and arguably playing like the league-MVP but mostly missing from the National conversation thanks in large part to the absence of a consistent rushing attack (what's new?) and a defense capable of stopping anyone. He's posted three straight 300-yard efforts with a combined 10:2 touchdown-to-interception ratio in his last three games and leads the NFL in yards off of play-action. Rest assured that Stafford is licking his chops about the opportunity to take advantage of this struggling Bears team that is clearly missing Akeem Hicks. Since losing Hicks to an elbow injury in London five weeks ago, the Bears have registered just six sacks. You knew the offense was bad but probably thought the defense was handling business as usual - not so much. For the Bears, they'll look to attack the Lions and their 31st ranked total defense and 27th ranked rushing defense. It's not like Nagy doesn't have the tools to run the ball but the Bears have posted just 241 rushing yards in their last three games combined and are averaging 80.5 yards per game (27th in the NFL). The Lions send just 3-man rushes more than anyone in the NFL and it's not even close. So QB Mitch Trubisky should have time to look for weapons like Allen Robinson and TE Trey Burton downfield. Best Bet & Final Prediction In a QB-driven league, I have to go with the hot hand in this matchup. While Matt Patricia's defense has not put a complete game together all season, Stafford and WRs Kenny Galloday and Marvin Jones have looked unstoppable as of late. With a Bears defense struggling as of late and an offense that is 30th in passing and 27th in rushing, I don't see how Trubisky keeps up in this matchup with Stafford. Trubisky gets rattled in the pocket, is hesitant to attempt the big throws and ultimately looks lost as a starting NFL QB - all of that should bode well for a Lions defense that sends four pass rushers and drops everyone else back in coverage - looking to cause a turnover. FINAL SCORE: LIONS 24 BEARS 14
[+ More]

Social predictions and betting insights on the Detroit vs Chicago matchup. 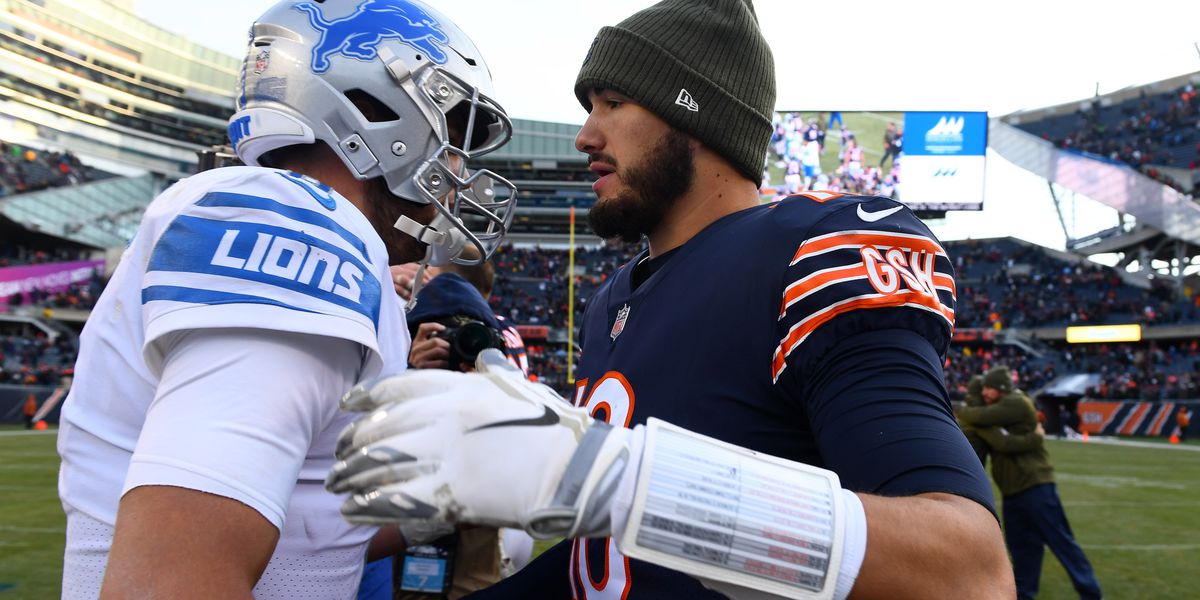 I'll take Lions offense over Bears defense with more trust in Patricia to get his defensive line to exploit Trubisky. I don't know if Nagy has enough up his sleeve to keep up with the pass attack of Detroit.

My Detroit vs Chicago predictions:

"If you put Matthew Stafford on this Bears team, they win the NFC North or at least make the playoffs.â€ â€” @ClayTravis pic.twitter.com/3E12H4QuiT

Detroit's QB Mathew Stafford Questionable Stafford (hip/back) is trending toward a game-time decision for Sunday's 1 p.m. ET kickoff against the Bears, Ian Rapoport of NFL It appears as if Stafford's 136-game starting streak could be in serious jeopardy, as the veteran quarterback evidently is dealing with some discomfort thanks to a back injury he suffered last week, in addition to a hip problem that has been giving the 31-year-old issues throughout the better part of October. Multiple reporters indicated Stafford was moving fine at practice this past week, but a questionable designation following Friday's practice report leaves open the possibility Stafford could miss his first game since 2010. David Blough would operate as the starting quarterback in the event Stafford is unable to play.