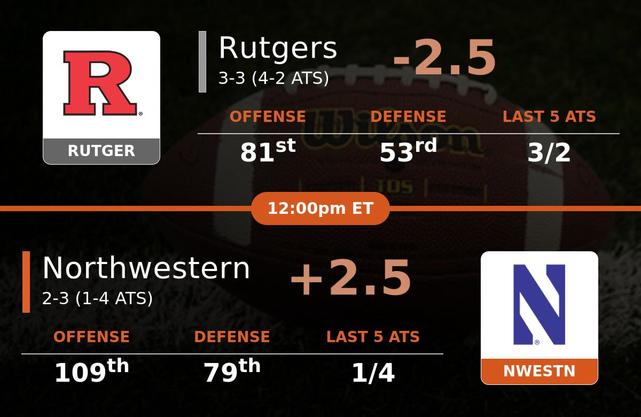 doUwanna Won 50% of last 10 NCAAF predictions
Rutgers Scarlet Knights will play the Northwestern Wildcats Saturday afternoon in a match-up of teams that sit at the bottom of their respective Big 10 divisions. Neither of these schools are playing well lately, however, the Wildcats have not made anywhere close to the number of mental mistakes that Rutgers has made. Rutgers is on a 3-game losing skid, and I expect this to be a close game decided at the end of the game. In a match-up of conference teams home underdogs facing an opponent that has allowed 5.5 or more rushing yards per attempt in their last two games are 43-20 ATS over the last 10 seasons. The Wildcats are 6-2 ATS in their last 8 home games, and 4-1 ATS in their last 5 games after allowing more than 200 yards rushing in their previous game. Take Northwestern +2.5
Read More
$100 | NWESTN +2.5
@rcobbett22

rcobbett22 Won 70% of last 10 NCAAF predictions
Does it get any more B10 than Rutgers and Northwestern? Both of these teams are being outgained by their opponents (on average) and their offenses are gaining almost the same amount per game. Northwestern’s defense is one of the worst in all of football as they have allowed 450 YPG and with no apparent strength, the balanced attack of the Scarlet Knights will be able to put up big numbers against in this one. My pick- Rutgers -2.25
Read More
$100 | RUTGER -2.5
$100 | RUTGER -131
@Reno247

Reno247 Won 70% of last 10 NCAAF predictions
After facing several tough Big 10 opponents, Rutgers gets the respite it needs traveling to Northwestern. Northwestern has completely fallen apart from last years team, and should not have the scoring to keep up with Rutgers. RUTGERS 24-14. Taking Rutgers moneyline.
Read More
$100 | RUTGER -131
@Covers

Betting Prediction: Northwestern will Win, Cover the Spread, and the Total will go Over.

Vegas has been overvaluing the Scarlet Knights and been expecting too much from the Wildcats lately.