On Wednesday, the Cal State Fullerton Titans will play the UC Irvine Anteaters at Bren Events Center in Irvine, California. Cal State Fullerton is looking for its fourth consecutive victory on Wednesday when it visits UC Irvine. Following a 79-72 victory over Hawaii, the Titans are 9-7 overall and 3-1 in Big West play. The last three games have been won by CSU Fullerton. Vincent Lee leads CSU Fullerton in rebounding with an average of 5.4 rebounds per game. Latrell Wrightsell Jr leads the team in scoring and assists with an average of 16.3 points and 2.5 assists per game. With only two players averaging double figures in scoring, CSU Fullerton is scoring 69.4 points per game as a team.

On Wednesday, UC-Irvine hosts CSU Fullerton in an attempt to win its fourth consecutive game. The Anteaters are 10-5 overall and 3-0 in Big West play after beating Long Beach State 87-70. UC Irvine's leading scorer was DJ Davis with 20 points. A 50.7% shooting percentage was the average for the Anteaters, while 39.7% of Long Beach State's shots were made. Dawson Baker leads UC Irvine in scoring with 14.1 points per game. Bent Leuchten ranks first in rebounding with 6.1 rebounds per game. Pierre Cockrell II leads in assists with 5.0 assists per game. The UC Irvine team averages 79.1 points per game with three players averaging double figures in scoring.

Under is the bet here against UC Irvine, which CSU Fullerton is likely to win on the road. In eight of Fullerton's last 10 overall games, as well as in each of the Titans' last six games played on Wednesdays, UNDER has cashed. Averaging 66.2 points per game, Cal State Fullerton holds its opponents to 41.2% shooting overall and 30.2% shooting from three-point range. In our final score prediction, the Titans will win, but we recommend playing UNDER 65-60.

Our prediction: Anteaters 77 to Titans 72. 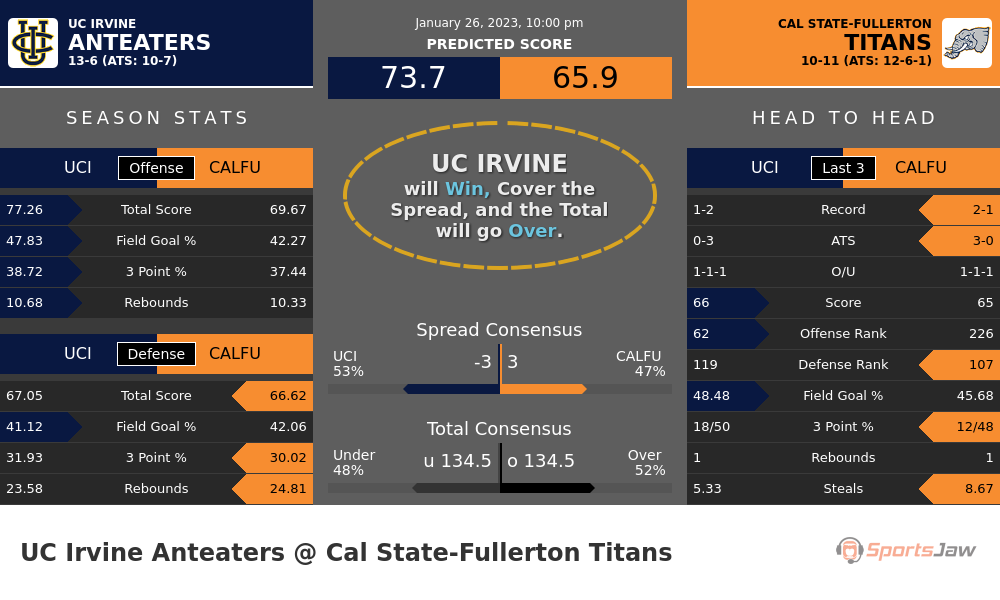 The Anteaters have a stronger offense and both teams have a compariable defense. The Titans won more games straight up and against the spread over their last 3 matchups. Adjusted score predictions based on power rankings and strength of schedule: Anteaters 74 to Titans 66. 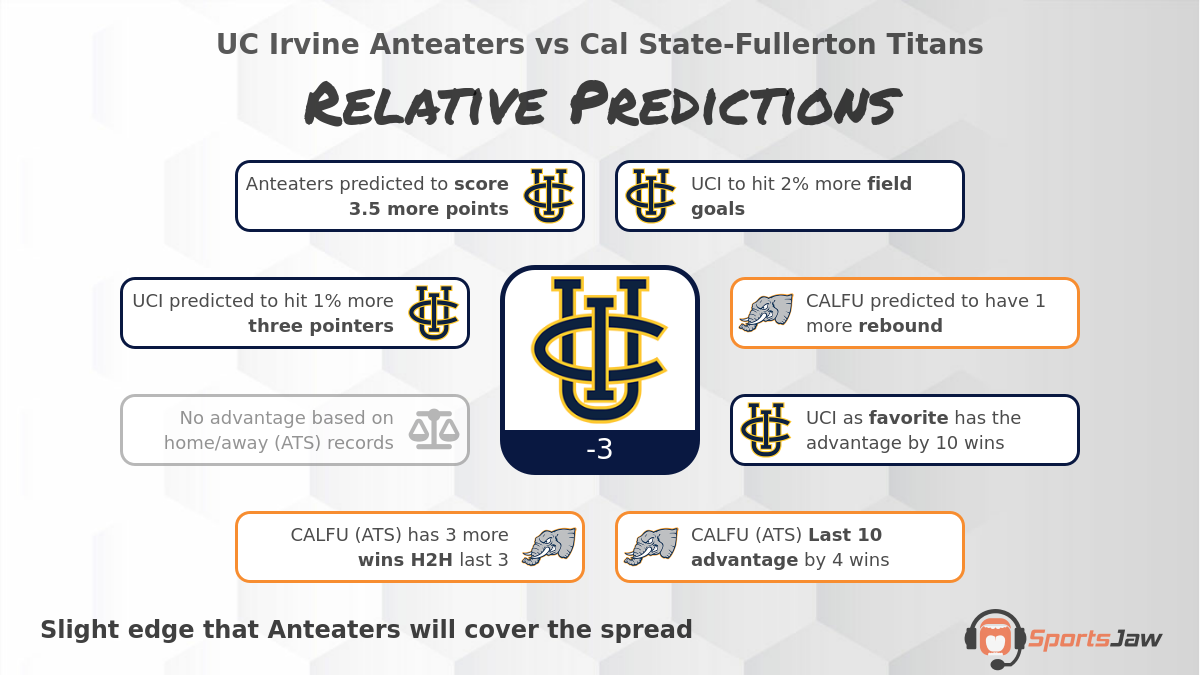 After crunching 8 data points, our relative predictions model has elected to not make a prediction on this game - view the UC Irvine vs CSU Fullerton infographic for details.