With a win over Cal Poly, Beach seeks its third consecutive win

Lately, Long Beach State has been playing well, winning three of their last five games, including a victory over Cal Poly. It will be their third consecutive win against the Cal Poly Mustangs and their second victory against them this month. Beach dominated the Mustangs 77-58 in their last matchup, shooting 47.4% from the field, 31.6% from beyond the arc, and 68% from the free throw line. The team also had 37 rebounds, 18 assists, 10 steals, and four blocks while turning the ball over 13 times. AJ George (15 points, three rebounds, three assists, 44.4% field goal percentage) led all starters with double-digit points.

Following a recent loss to Long Beach, Cal Poly is looking for revenge

A big loss to Long Beach State Beach earlier this month marked the seventh consecutive loss for the Cal Poly Mustangs. In this matchup, they hope to get some revenge against Long Beach State and snap their seven-game losing streak. Their last game against the Beach ended in a 77-58 defeat where they shot 34.5% from the field, 38.5% from beyond the arc, and 68.2% from the free throw line. Furthermore, they collected 33 rebounds, 11 assists, six steals, and two blocks while turning the ball over 19 times. Trevon Taylor (13 PTS, 6 REB, 4 STL, 66.7% FG) scored double-digit points.

Long Beach State Beach won 77-58 against the Cal Poly Mustangs just a couple of weeks ago, so they know what they're up against without too much time for things to change with the Mustangs' playstyle, so Long Beach State is expected to easily win in San Luis Obispo. On average, Long Beach State's scoring offense averages 77 points per game, making them a better team overall. Against the Mustangs, George had a solid 15-point performance, so keep an eye out for him again. Additionally, Long Beach's defense caused problems for Cal Poly in their last meeting, allowing only one player to score double figures. Beach shut down Mustangs' scorers well, so expect more of the same. Let's look at Long Beach State.

Our prediction: Beach 84 to Mustangs 77. 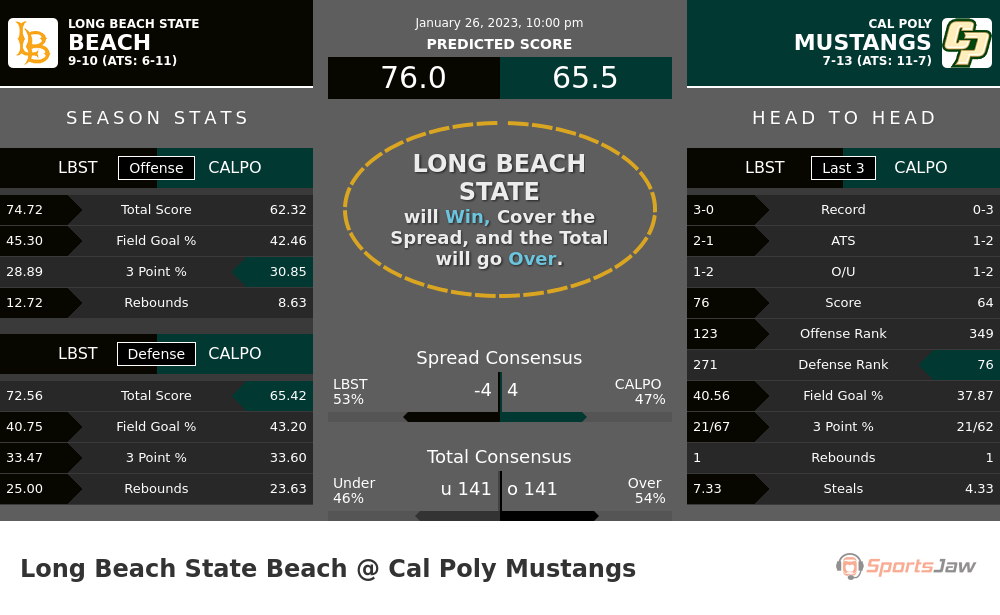 have a significantly better offense and the Mustangs have a stronger defense. The Beach won more games straight up and against the spread over their last 3 matchups. Adjusted score predictions based on power rankings and strength of schedule: Beach 76 to Mustangs 66. 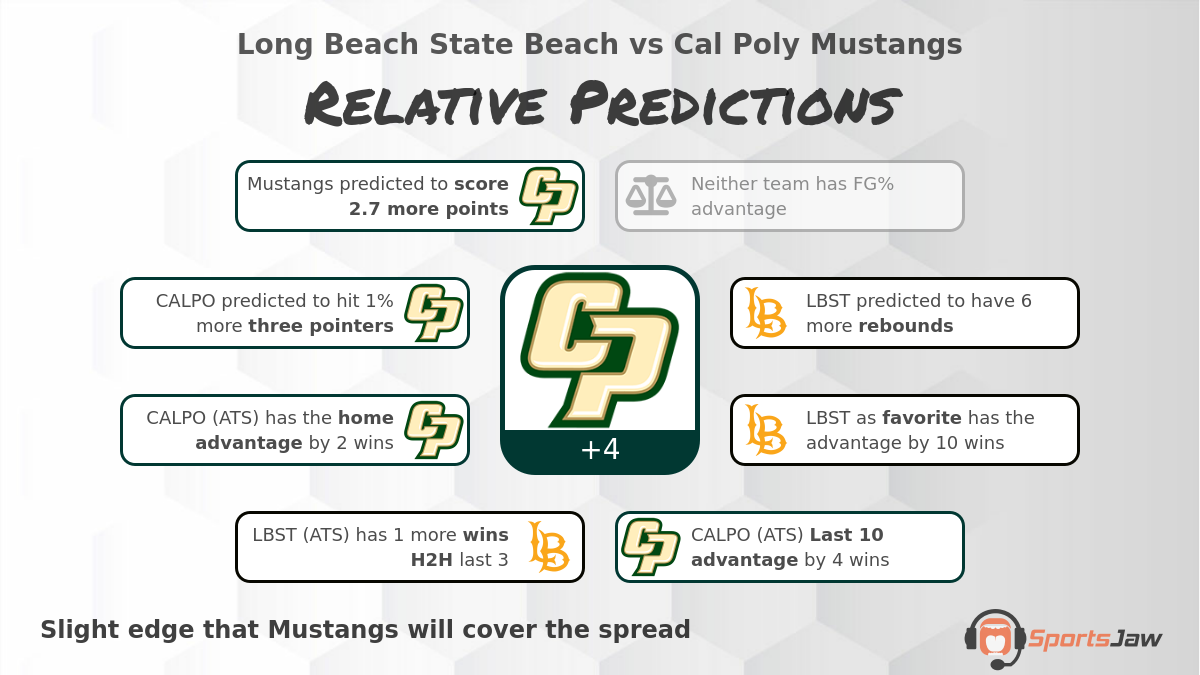 After crunching 8 data points, our relative predictions model has elected to not make a prediction on this game - view the Long Beach St. vs Cal Poly infographic for details.