San Diego is on the road playing Pepperdine at the Firestone Fieldhouse stadium on Thursday, 1/26/2023 @ 10:00pm EST. Pepperdine -4.5 was the opening favorite and current line is Pepperdine -4.

A WCC game will take place in Malibu, CA on Thursday night between the San Diego Toreros and Pepperdine Waves. Currently, San Diego is 9-12 overall and 2-5 in the WCC. In conference play, the Toreros are nine spots ahead of Pepperdine, which they face tonight. In the WCC, Pepperdine is 0-7 and 7-14 overall. 9:00 pm EST is the scheduled time for the opening tap.

Pepperdine is the only conference team without a win this season, so the San Diego Toreros will look to end their two-game losing streak against them. This will be the Toreros' third straight road game and a chance to pick up their first win. Last Thursday, San Diego lost to Portland 88-83. Since then, the team has been off. During the loss, San Diego's defense struggled, allowing Portland to shoot 61% from the field and 59% from three-point range. Marcellus Earlington led the Toreros with 32 points, five rebounds, and three assists. In the Toreros' loss, Sigu Sisoho Jawara contributed 20 points and four assists. Last but not least, Eric Williams Jr. had a double-double with 14 points and 11 rebounds.

Trying to break a dubious streak

This matchup will be Pepperdine's first in the WCC. Overall, they have lost eight straight games, including seven in a row in conference play. The Pepperdine University women's basketball team lost to Portland 91-76 on Saturday. A 16-point halftime deficit never allowed the Waves to mount a comeback. A total of four Pepperdine players finished in double figures, including Jevon Porter, who recorded his fourth double-double of the season with 14 points and 10 rebounds. In a stat-filled performance, Maxwell Lewis led the Waves with 18 points, seven rebounds and six assists. It was Pepperdine who shot 48% from the field, but Portland shot 56%.

This matchup is a surprise for Pepperdine. At 6-5 overall this season, the Waves have done well at home. It is the Waves' first home game of the season against a San Diego team that is playing with only a 2-5 record away from home and is missing one of its top scorers. The Toreros have one of the worst field goal percentages in the country, while Pepperdine shoots a high FG%. It is expected that Pepperdine will make the most of its opportunities to run and will push the tempo to its advantage. There is a lot to be learned from the second half of the first meeting between these two teams, a 3-point San Diego victory. A porous San Diego defense allowed Pepperdine to shoot 70% from the field. Although they won't shoot it at that level, they will shoot well enough to split the season series. 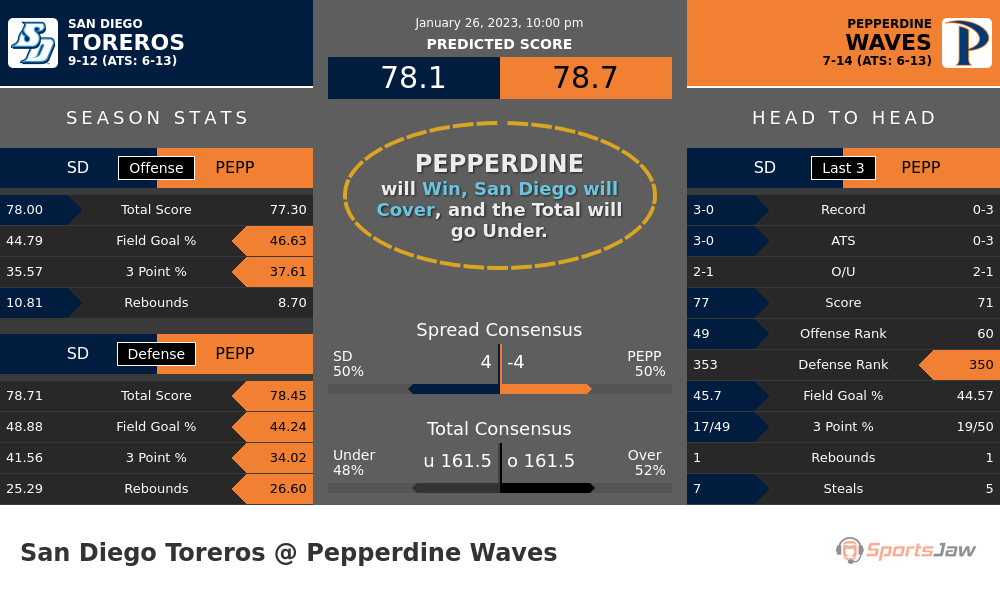 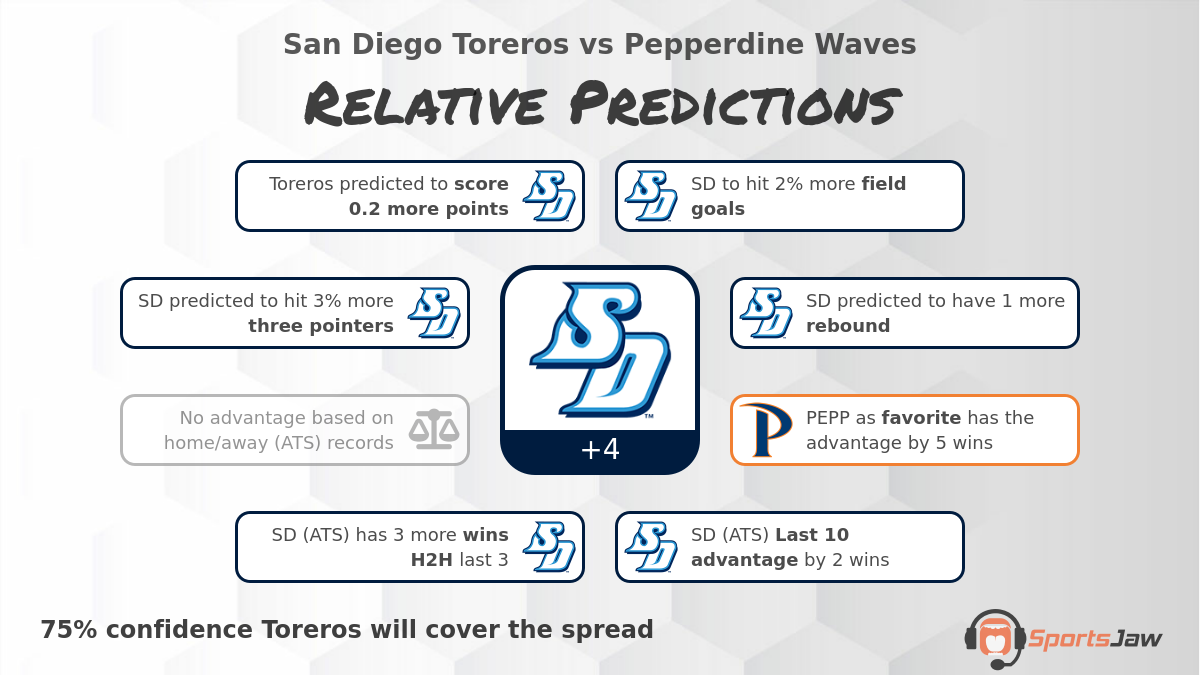 After crunching 8 relative data points, our relative predictions model has a 75% confidence Toreros will cover the spread - view the San Diego vs Pepperdine infographic for details on this prediction.