Against the Northern Kentucky Norse (13-8, 8-2 Horizon), the Green Bay Phoenix (2-19, 1-9 Horizon) will try to pick up their first road win of the season. After losing to Robert Morris 72-38, the Phoenix are nine-point underdogs this week. In their last match, the Norse won 74-54 against Purdue Fort Wayne as three-point favorites. In its last 10 games against Green Bay, Northern Kentucky is 8-2.

A losing streak of 11 games has plagued the Phoenix this season. A win over the Norse will give them their first road win of the season, breaking their streak. 59.4 points are averaged per game by Green Bay. Their last game saw them score 38 points, making 21.6 percent of their field goals and 9.5 percent of their three-pointers. The Phoenix were led by Randy Tucker, who scored 11 points and grabbed seven rebounds. As a team, Clarence Cummings III and Jack Rose combined for six points and three rebounds each. The Packers have struggled defensively, allowing 77.3 points per game. To win this game, they must do better than they did in their last game when they gave up 72 points.

With three straight wins, the Norse are in good shape at the moment. Against the Phoenix, they will try to keep the momentum alive with their fourth straight win. In Northern Kentucky's games, the team averaged 65.6 points. During their last game, they made 50.9 percent of their field goals and 40 percent of their three-pointers. The Norse were led by Marques Warrick, who scored 18 points and grabbed five rebounds. Trevon Faulkner added 14 points, four assists, and three steals, while Sam Vinson finished with 17 points, six rebounds, and four assists. In terms of defense, Northern Kentucky has been solid, allowing 65.5 points per game on average. In their last game, they gave up 54 points, and if they want to win, they will need to match that effort.

In their last 11 road games, the Phoenix have lost 11 straight games. On offense, they aren't very effective, averaging less than 60 points per game on the road. Additionally, they have struggled at the free throw line, making less than 70 percent of their attempts. They don't rebound the ball well and won't get many chances to score against the Norse. In addition, they've played carelessly with the ball, which will allow the Norse to score easily. Their last three opponents were held under 55 points per game, so expect them to keep Green Bay's offense in check. Four of the Norse's last five games have been won at home, and they have won 11 out of 13 games on the road. 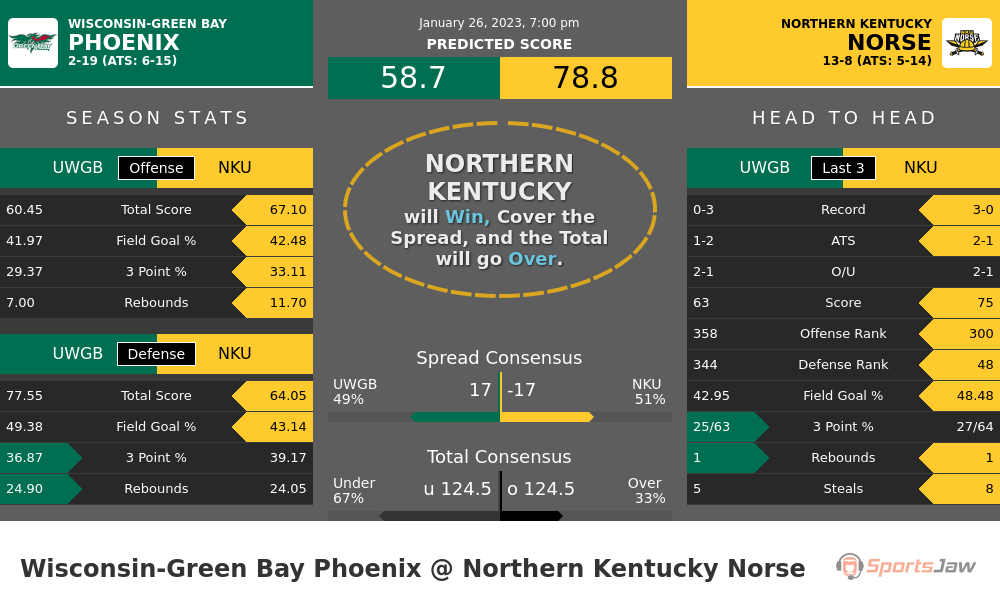 The Norse have a slightly better offense and the Norse have a significantly better defense. The Norse won more games straight up and against the spread over their last 3 matchups. Adjusted score predictions based on power rankings and strength of schedule: Phoenix 59 to Norse 79. 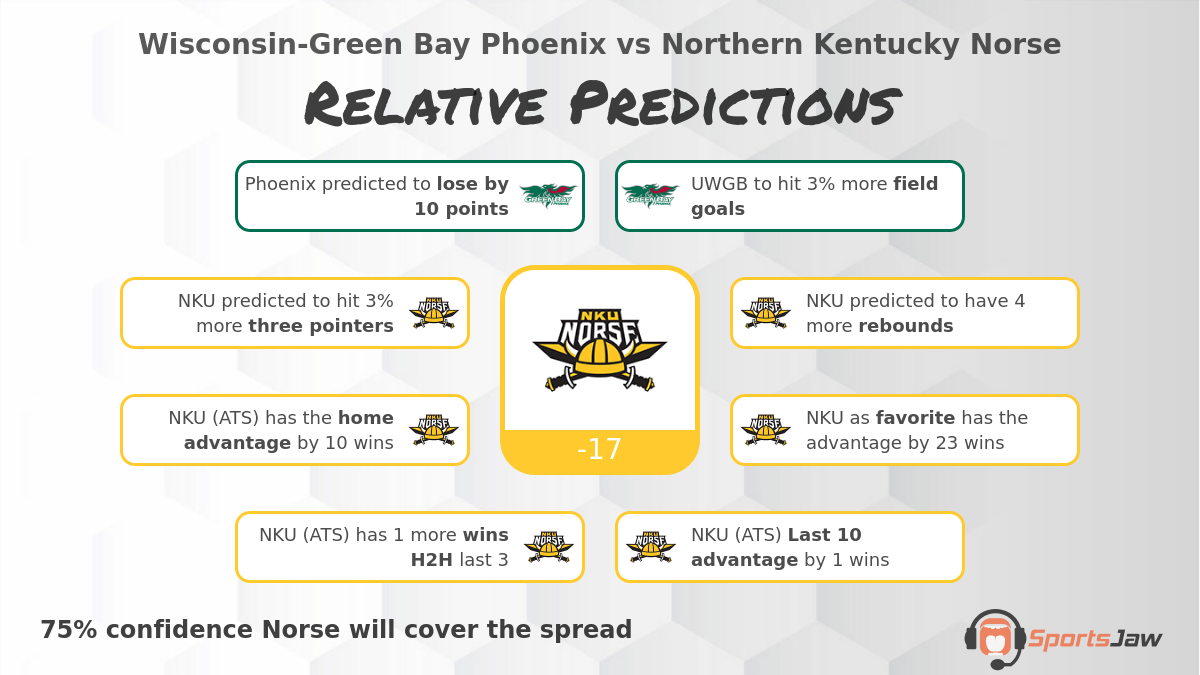 After crunching 8 relative data points, our relative predictions model has a 75% confidence Norse will cover the spread - view the Green Bay vs Northern Kentucky infographic for details on this prediction.