There will be a Mountain West Conference showdown on Wednesday, January 25, at Viejas Arena in San Diego, California. Here is the right pick for Utah State vs San Diego State. In the first meeting between the Aggies and Aztecs of the season, the Aggies open as a 7-point home favorite, while the total is listed at 145.0.

In its third straight victory, Utah State looks to continue its winning streak

The Utah State Aggies (16-4; 11-8 ATS; 5-2 conference) defeated San Jose State 75-74 on Saturday. It was the Aggies' second straight win, and the third in four games, but they failed to cover an 11.5-point spread, ending their ATS losing streak at three games. Their final 20 minutes saw them rally from a ten-point second-half deficit to score 45 points. On Saturday, the Aggies made 53.8% of their field goals. With a 19/12 assist-to-turnover ratio, they shot 10-for-23 from three-point range and 9-for-13 from the free-throw line. Utah State's defense wasn't very effective, as it surrendered 17 offensive rebounds. As a junior guard, Steven Ashworth scored 19 points and dished out six assists, while fellow junior G Max Shulga added 15 points, five rebounds, and three assists.

As well, SDSU hopes to win its third consecutive game

Last Saturday, the San Diego State Aztecs (15-4; 6-11-1 ATS; 6-1 conference) defeated Air Force 70-60 as 9.5-point road favorites. As a result of 15 offensive rebounds and 22 of 23 attempts from the free-throw line, SDSU overcame a poor field goal percentage of 38.6 (4-of-15 from distance). Additionally, the Aztecs only handed out six assists. Keshad Johnson posted a double-double of 13 points and 10 rebounds against the Falcons. 6-foot-4 senior guard Matt Bradley had 13 points and seven rebounds, while fellow senior G Darrion Trammell had 12 points and a few boards. In their eighth game in a row, the Aztecs won their second straight game.

The Aztecs defend the 3-point line well, and I believe they will slow down the Aggies. Also, SDSU ranks among the top-50 teams in both defensive rebounding percentage and free-throw rate, so I'll take the Aztecs to win and cover. Despite their offensive skill, the Aggies struggle to defend at a high level and rely too much on 3-point shooting. The spread has been a problem for both Utah State and SDSU lately. Over the Aggies' last five games, their ATS record has been 1-4, and their ATS record at home has been 3-5. The San Diego State Aztecs are 9-0 ATS in their last nine games against Utah State at home. 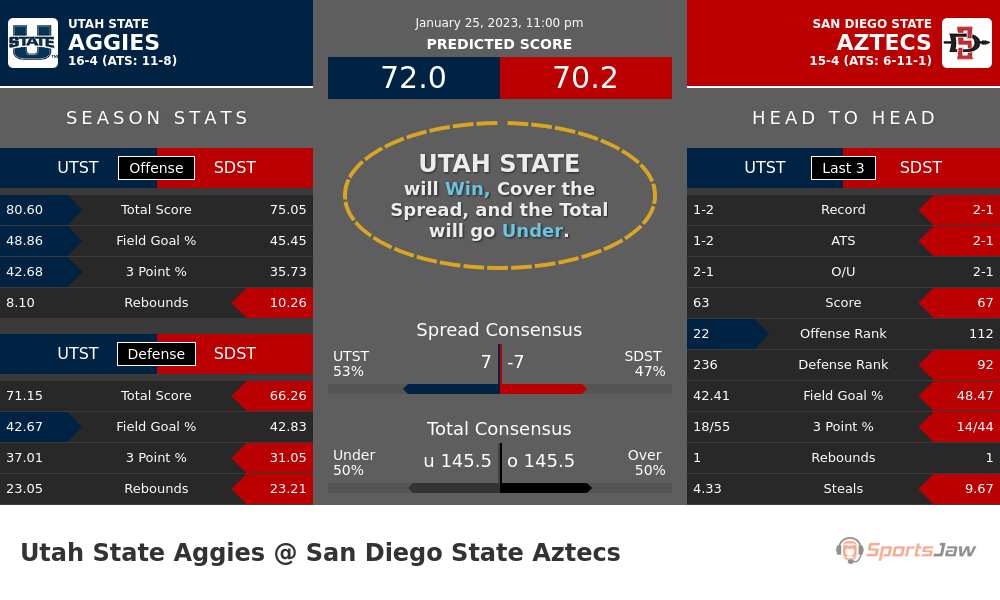 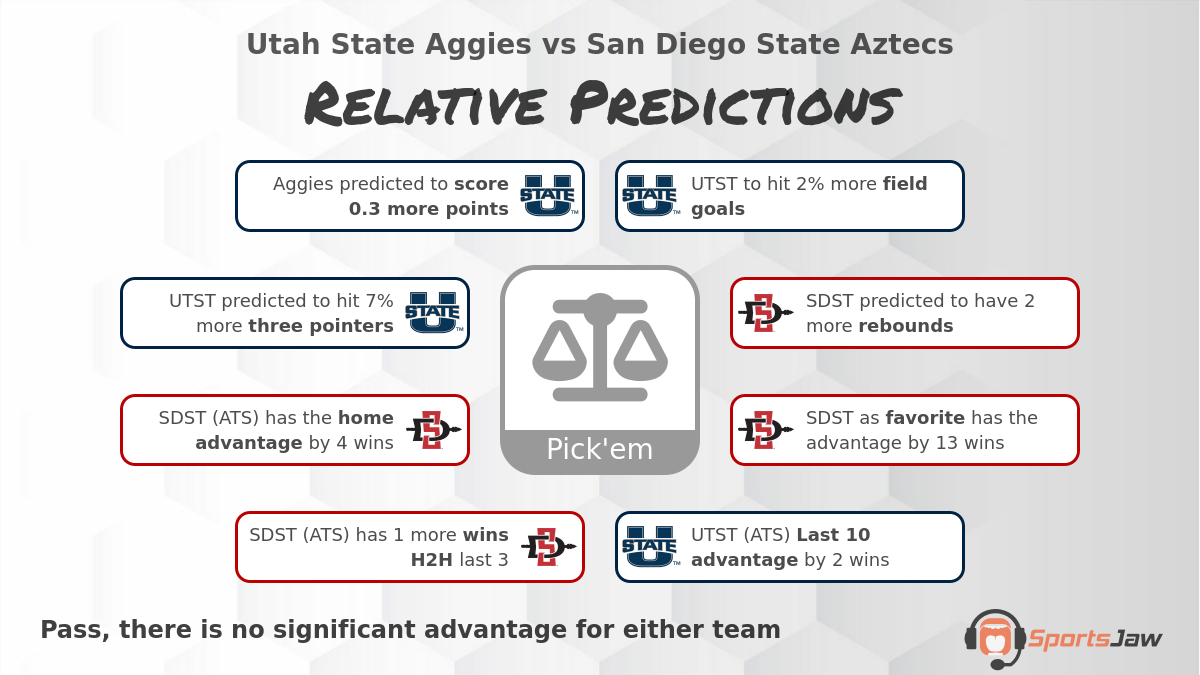 After crunching 8 data points, our relative predictions model has elected to not make a prediction on this game - view the Utah State vs San Diego St. infographic for details.