Chicago State is on the road playing Stanford at the Maples Pavilion stadium on Wednesday, 1/25/2023 @ 10:00pm EST. Stanford -14.5 was the opening favorite and current line is Stanford -17.

In non-conference play, the Chicago State Cougars travel to Palo Alto to face the Stanford Cardinals at Maples Pavilion. This will be the first time these two programs have faced off.

As a result of its win over Coastal Carolina in Conway, Chicago State has dropped to 5-16. After leading at halftime, the Cougars held on to defeat the Chanticleers by four points. As a team, Chicago State scores 67.1 points per game while allowing 73.7 points per game, while shooting 41.4% from the field. Despite their largest win of the season, Chicago State may not last long in the palm trees. The Cougars haven't won many games this season, but they've capitalized as underdogs a few times. In Wesley Cardet Jr. and Jahsean Corbett, CSU is led by a pair of sophomore guards. With 16.1 points per game, Cardet Jr. leads the Cougs after scoring 21 points against Coastal. In five of his last seven games, Corbett has grabbed double-digit rebounds, averaging 13.1 points per game and 9.2 rebounds per game. With 120 games of experience, Dayton transfer Elijah Weaver is averaging 11.8 points per game and 4.3 rebounds per game.

After beating Oregon in Palo Alto, Stanford improved to 7-12. In the end, the Cardinals defeated the Ducks by seven points by holding them to 38% shooting. Stanford scores 67.9 points per game, while allowing 66.2 points per game and shooting 43.6% from the field. The Cardinals have a high chance of winning three games in a row for the first time this season. This week could be another fruitful one for the Cardinal program after facing Chicago State at home. After scoring 18 points against Oregon State, four-year starter Spencer Jones leads the team in scoring at 12.9 points per game. He is second on the team at 10.1 points per game behind Davidson transfer Michael Jones. Harrison Ingram leads the team in rebounding (5.2), assists (3.3), and scoring (9.3 points per game).

In this season's over/under, Chicago State is 7-12-1 against the spread. In ATS games this year, Stanford has a 10-7 record, while its O/U record is 9-10. As a result of Stanford's recent performance, the margin for this one appears to be a bit stiff. The underdog spread has been a successful tool for Chicago State this season, and this looks like another one. It's difficult to ignore Stanford's momentum in this non-conference matchup, and it's wise to lean on their defensive prowess to pick the under.

Our prediction: Cougars 50 to Cardinal 87. 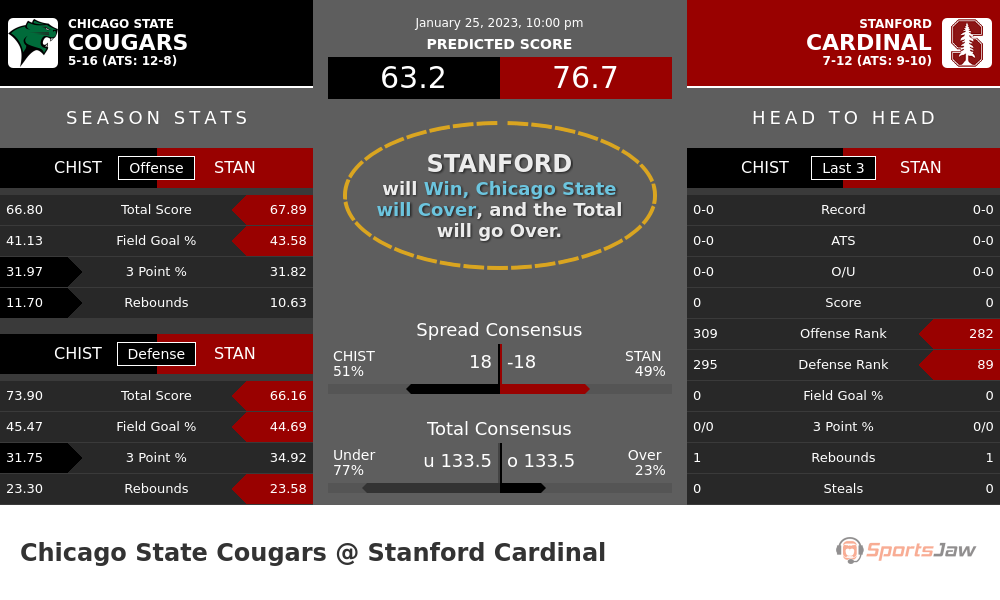 Both teams have a compariable offense and the Cardinal have a stronger defense. The Green Wave won more games straight up and against the spread over their last 3 matchups. Adjusted score predictions based on power rankings and strength of schedule: Cougars 63 to Cardinal 77. 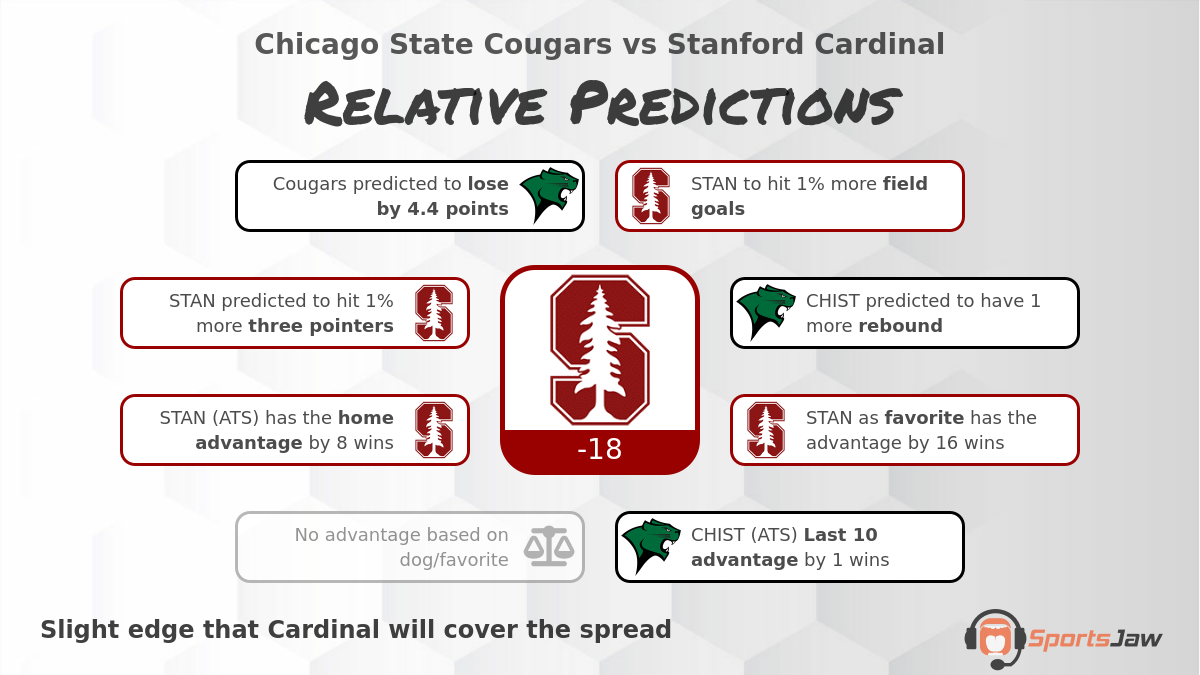 After crunching 8 data points, our relative predictions model has elected to not make a prediction on this game - view the Chicago State vs Stanford infographic for details.