Indiana is on the road playing Minnesota at the Williams Arena stadium on Wednesday, 1/25/2023 @ 9:00pm EST. Indiana -9 was the opening favorite and current line is Indiana -10.

On Wednesday, January 25, the Indiana Hoosiers take on the Minnesota Golden Gophers in a Big Ten Conference showdown at Williams Arena in Minneapolis, Minnesota. Tipoff is set for 9:00 PM ET, and the Hoosiers are 9-point road favorites with 136.5 points. This is Indiana's sixth straight SU and ATS victory over Minnesota, and the total has been over in their last four meetings.

This past Sunday, the Indiana Hoosiers (13-6; 9-9-1 ATS; 4-4 conference) extended their winning streak to three games. The Hoosiers defeated the Michigan State Spartans 82-69 as 4.5-point home favorites after dismantling the No. The No. 18 Wisconsin Badgers won 63-45 at home and the Illinois Fighting Illini won 80-65. Michigan State was trailing by nine points at halftime when Indiana came back to win. As a team, the Hoosiers shot 9-15 from 3-point range and 21-24 from the charity stripe, while posting a 13/9 assist-to-turnover ratio. With 31 points, 15 rebounds, five assists, and five blocks, senior forward Trayce Jackson-Davis led the way, followed by sophomore guard Tamar Bates and junior guard Trey Galloway with 17 each.

The Wolverines almost upset the Gophers

This past Sunday, the Minnesota Golden Gophers (7-11; 8-10 ATS; 1-7 conference) extended their losing streak to three games with a 60-56 loss at Michigan after losing to Illinois 78-60 and Purdue 61-39 at home. In Ann Arbor, the Gophers covered a huge 12.5-point spread despite giving up a ten-point lead to the Wolverines in the first half. As a result, Minnesota held Michigan to a 36.7% field-goal percentage (2-for-14 from long distance). A 40.4% field goal percentage was achieved by the Golden Gophers (6-for-23 from deep), but they also committed 15 turnovers. Ta'Lon Cooper scored 15 points and had ten rebounds, while Jamison Battle had 14 points and five boards, and Dawson Garcia had 13 points, three assists, and seven turnovers.

It is a solid defensive unit for Minnesota. On 46.1% of their shots from inside the arc (59th in the country), the Golden Gophers allow 100.8 points per 100 possessions (111th in the country). Trayce Jackson-Davis will be difficult to contain, but the Gophers might not be able to handle the Hoosiers' defense. In contrast, Indiana allows just 95.9 points per 100 possessions (42nd) on 41.0% field goal shooting (62nd) to Minnesota. Over their last three games, the Hoosiers have played well, and I expect more of the same against the slumping Golden Gophers. The Hoosiers are 5-0 SU and ATS in their last five games against the Gophers, who have lost 1-8 ATS in their previous nine home games.

Our prediction: Hoosiers 85 to Golden Gophers 64. 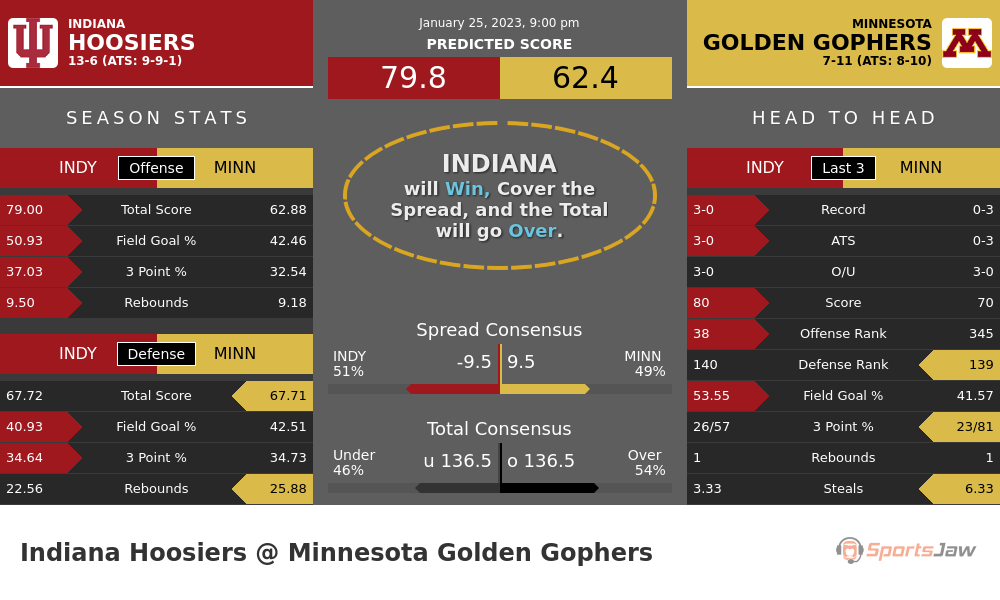 have a significantly better offense and both teams have a compariable defense. The Hoosiers won more games straight up and against the spread over their last 3 matchups. Adjusted score predictions based on power rankings and strength of schedule: Hoosiers 80 to Golden Gophers 62. 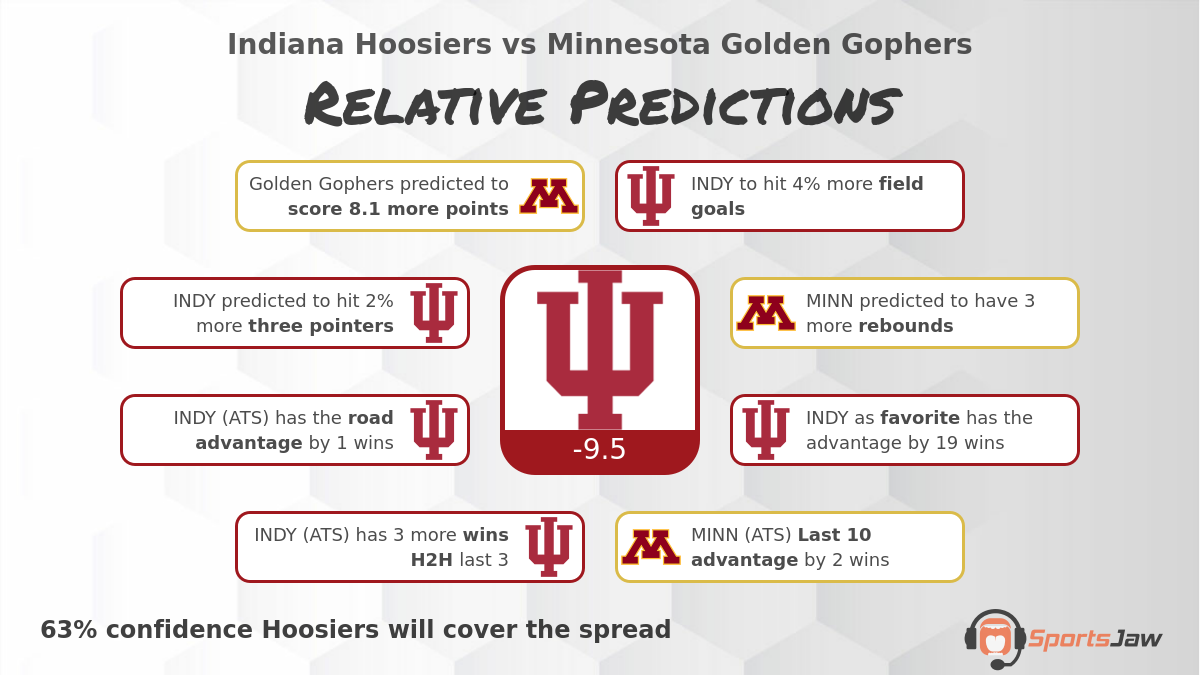 After crunching 8 relative data points, our relative predictions model has a 63% confidence Hoosiers will cover the spread - view the Indiana vs Minnesota infographic for details on this prediction.