St. Johns is on the road playing Creighton at the CHI Health Center Omaha stadium on Wednesday, 1/25/2023 @ 9:00pm EST. Creighton -8 was the opening favorite and current line is Creighton -9.5.

CHI Health Center Omaha hosts St. John's (13-7 SU, 9-11 ATS) in a Big East battle on Wednesday night at 9pm ET. St. John's has a 3-6 record, while Creighton has a 5-3 record. There were two meetings between these teams last season, with the Blue Jays winning both games. In this series, there have been four straight wins and covers.

The Wildcats' offense was non-existent

Before facing Villanova on Friday night, St. John's had won two straight after losing five straight. The Red Storm are ranked 79 in the latest Net Rankings, so they have a long way to go to qualify for the NCAA Tournament. Their home loss to Villanova was 57-49. It was St. John's defense that held the Wildcats to just 37% shooting from the field. However, the Red Storm only made 32% of their total shots, including 25% (3 of 12) from long range. The team also committed 17 turnovers. Red Storm leader Joel Soriano scored 14 points and grabbed 16 rebounds. A toe injury has forced Montez Mathis (9.6 points per game, 40.5% three-pointers) to miss the remainder of the season. As a result, he has not played since Jan. 3 and his defensive skills are likely to be lost. A.J. Storr will start, despite averaging just 6.4 points on 48.5% shooting (45.7% from three). With 16.4 points, 12.3 rebounds, and 1.5 blocks on 61.1% shooting, Soriano leads St. John's.

A bid is in the works

In the Net Rankings, Creighton is No. 20 and has won two straight after losing tough games to UConn by nine points and to Xavier by three. The team bounced back with wins over Providence at home (73-67) and Butler on the road (73-52). Four Bluejays scored in double figures in that victory as they opened up an 8-point halftime lead and pulled away after halftime. With a 47% field goal percentage and 23 rebounds, Creighton crushed the Bulldogs. There are many things Creighton does well, including shooting the ball. Their field goal percentage (46.2%), field goal defense (37.2%), and three-point defense (25.3%) rank second in the Big East. With a turnover margin of -1.45 and an assist-to-turnover ratio of 0.5, turnovers have been a major issue. The team ranks second in rebounding margin at +4.9.

With a scoring margin of 12.2, Creighton leads the Big East. On the defensive end, Kalkbrenner is an absolute beast in the paint, and on the offensive end he stretches the floor. There have been just two wins in the last eight games for the Red Storm. It doesn't help the Johnnies that Mathis isn't available. Their last game against Villanova, which is not the same team without Jay Wright, looked awful. On the road, the Red Storm shoot 21.8% from three-point range and the Bluejays shoot 49% at home. St. John's can shoot from deep while Creighton packs in the paint.  It's going to be a blowout.

Our prediction: Red Storm 73 to Bluejays 83.

Both teams have a compariable offense and the Bluejays have a slightly better defense. The Bluejays won more games straight up and against the spread over their last 3 matchups. Adjusted score predictions based on power rankings and strength of schedule: Red Storm 71 to Bluejays 80. 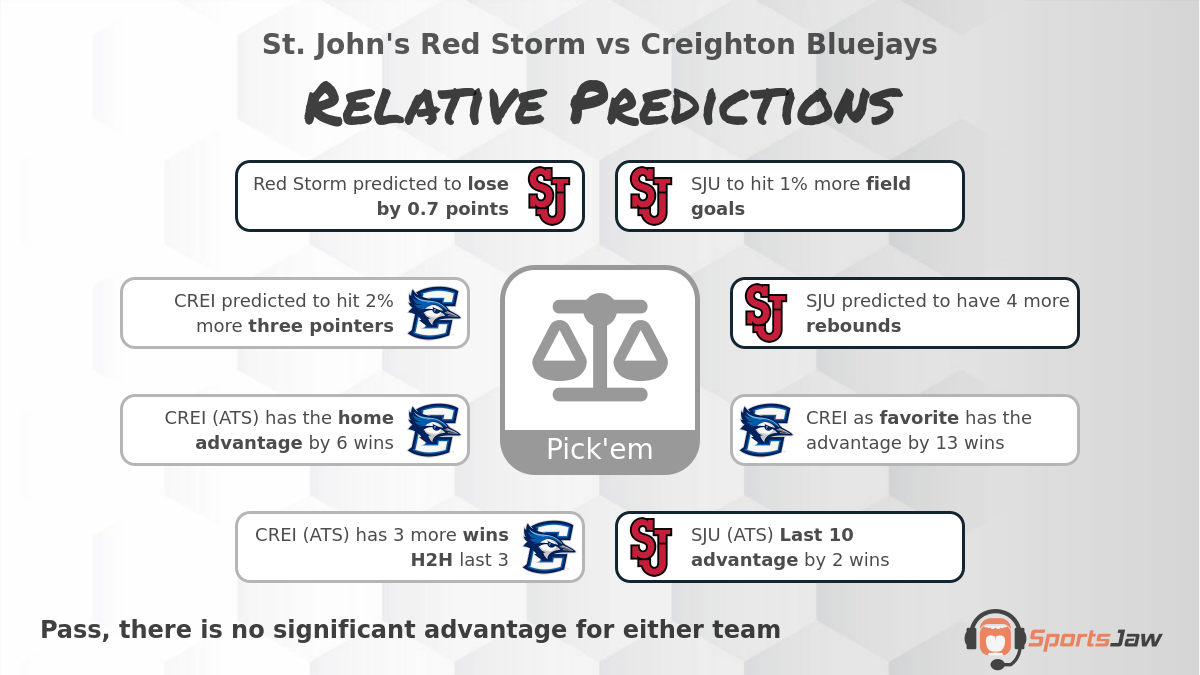 After crunching 8 data points, our relative predictions model has elected to not make a prediction on this game - view the St. Johns vs Creighton infographic for details.