South Florida is on the road playing Temple at the Liacouras Center stadium on Wednesday, 1/25/2023 @ 7:00pm EST. Temple -5.5 was the opening favorite and current line is Temple -6.

The Temple Owls and South Florida Bulls will face off on Wednesday at The Liacouras Center. There will be a 7:00 p.m. tip-off. Six-point favorites, the Owls are favored by 139.5 points. As a result of its victory over Central Florida in its last game, USF improved to 9-11 SU and 12-8 ATS. In conference play, it has a record of 2-5. A 12-9 SU and 13-7-1 ATS record led Temple to a win over Houston in its last game. In AAC competition, it is 6-2. The first meeting between these teams was won by South Florida, while the subsequent two were won by Temple. It is a 14-6 record for the Owls against the Bulls all-time.

Against UCF, USF picked up a key win

South Florida, which is 2-5 in the American Athletic Conference, is four games back of the lead. In the conference's preseason poll, the Bulls were predicted to finish ninth. After taking a five-game lead into halftime against the Golden Knights, USF won its last game by 13 points. In addition to shooting 44.3 percent from the field, the Bulls made 20-for-22 free throws. Additionally, they had 15 offensive rebounds, outrebounding their opponents 41-30. The Tigers scored 71.8 points on 44.2 percent shooting, including 33.7 percent from three-point range. Free throws are converted at 65.7 percent, and 33.1 rebounds are averaged, resulting in a +2.5 rebound margin.

In the AAC race, Temple is on the heels of Houston

The Temple Owls won a thrilling game against Houston, the number one team in the country, over the weekend. It was predicted that the Owls would finish fifth in the preseason AAC poll, but they now trail the Cougars by half a game. Temple shot just 31.1 percent from the field (14-for-45) against top-ranked Houston, but held its own on the glass and made 20-of-22 free throws. At halftime, the Owls were tied at 30 and didn't back down, showing the Philly toughness for which fans have cheered. On 41.8 percent shooting, the Owls scored 68.6 points, including 31.3 percent from beyond the arc. The team averages 32.4 rebounds and converts 77.9 percent of its free throws.

Overall, the Owls have gone 4-0 against the spread and have gone 5-1 against the spread after winning an ATS game. A key conference win on the road was one of their most impressive wins so far this season. A USF team that just picked up a decisive win of its own, they'll win and cover. South Florida will see Temple's hard-nosed defense in action, which may not be explosive offensively, but will surely get the job done. Despite keeping this game close for most of the game, the Bulls lack the offensive talent to defeat an Owls team that's committed to defense after a big win. 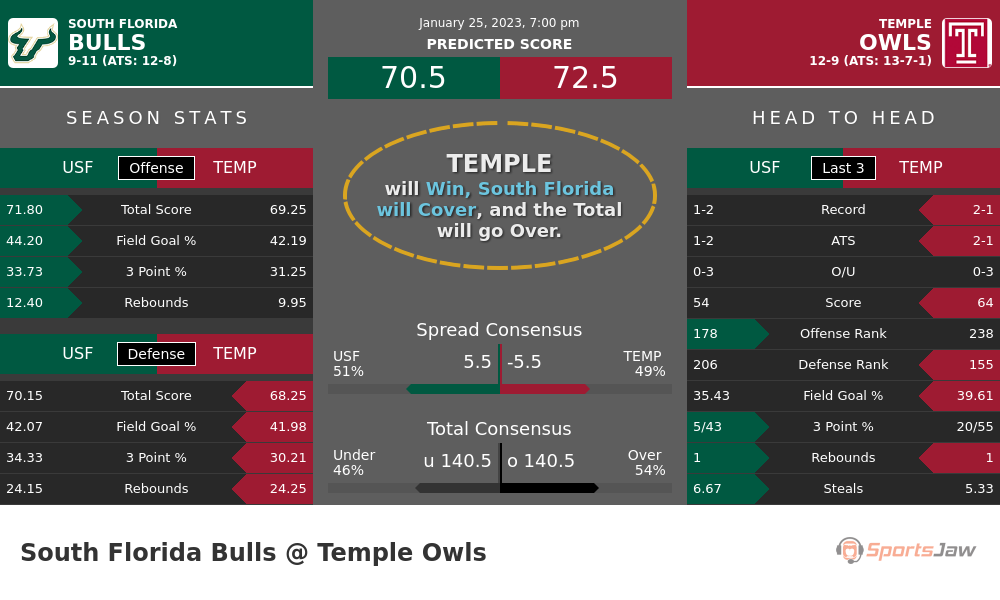 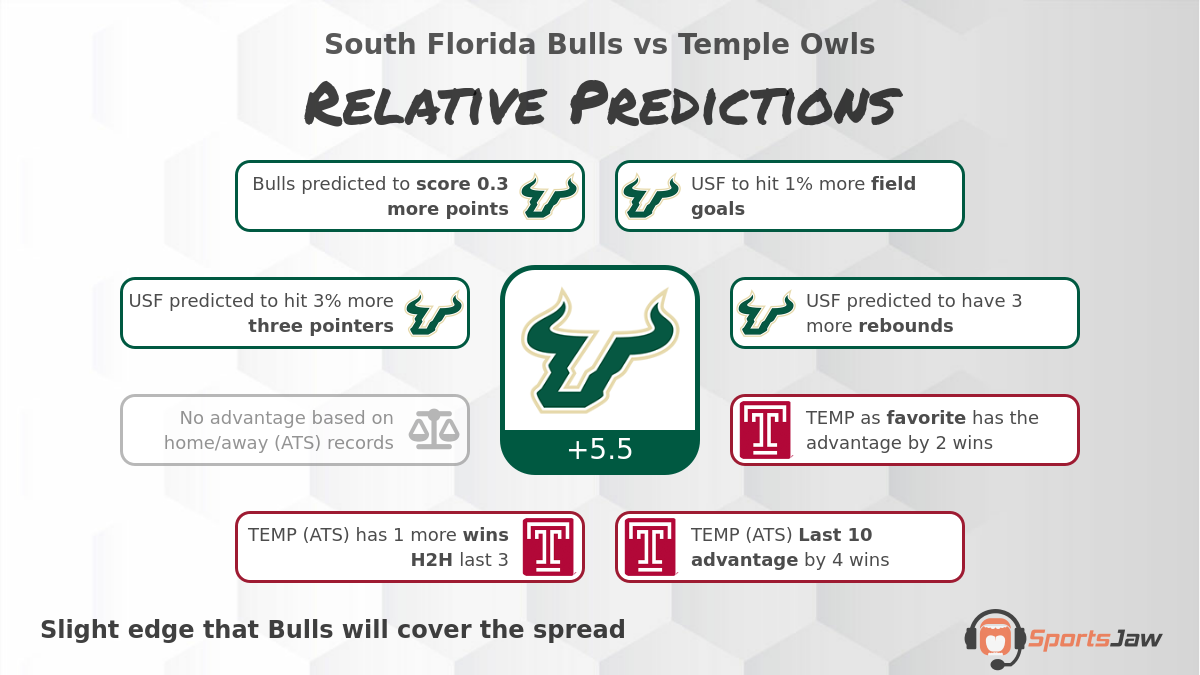 After crunching 8 data points, our relative predictions model has elected to not make a prediction on this game - view the South Florida vs Temple infographic for details.