Houston is on the road playing Central Florida at the Addition Financial Arena stadium on Wednesday, 1/25/2023 @ 7:00pm EST. Houston -7 was the opening favorite and current line is Houston -9.5.

The Houston Cougars travel to UCF on Wednesday night looking to bounce back from a disastrous loss. As a result of its 56-55 loss to Temple on Sunday, Houston lost its nine-game winning streak and was knocked off the top spot in the polls. Houston gave UCF everything it could handle on Dec. 31, losing by six points.

After a shocking loss, the Cougars hope to bounce back

As Houston is coming off just its second loss of the season, it is in an unfamiliar position heading into this game. In the first nine games of the season, the Cougars won nine games before losing to then-No. In the wake of their 71-65 loss to No. 8 Alabama, they proceeded on to win their next nine games. On Sunday, they lost to Temple as 19.5-point favorites, ending their nine-game winning streak. A 7-0 run by Houston tied the game with 1:30 left, but Damian Dunn split a pair of free throws to give Temple the victory. On Houston's final two possessions, Jamal Shead missed a 3-pointer and a driving layup.

Defense is also an imperative part of the Knights' game

The Knights have dropped consecutive games for the first time this season, losing to Tulane and South Florida on the road. Through the first 17 games of the season, the Knights were 13-4, losing to UNC Asheville, Miami, Missouri, and Houston - all by six or fewer points. Following the loss to the Cougars, they racked up a three-game winning streak, defeating East Carolina, SMU and Memphis. Trying to avoid falling back to .500 in conference play, this is their first home game since winning in double overtime against the Tigers.

Against a team that took Houston to the wire earlier this season, I'm not willing to lay nearly double digits on Houston. The Cougars are coming off their poorest performance of the season and will face a tough opponent on the road. Despite being a huge underdog, UCF easily covered the spread at Houston earlier this season. With their height and defensive tenacity, the Knights can disrupt Houston's offensive glass success. In a game this large, the pace will be snail's pace, adding some extra value.

Our prediction: Cougars 73 to Knights 55. 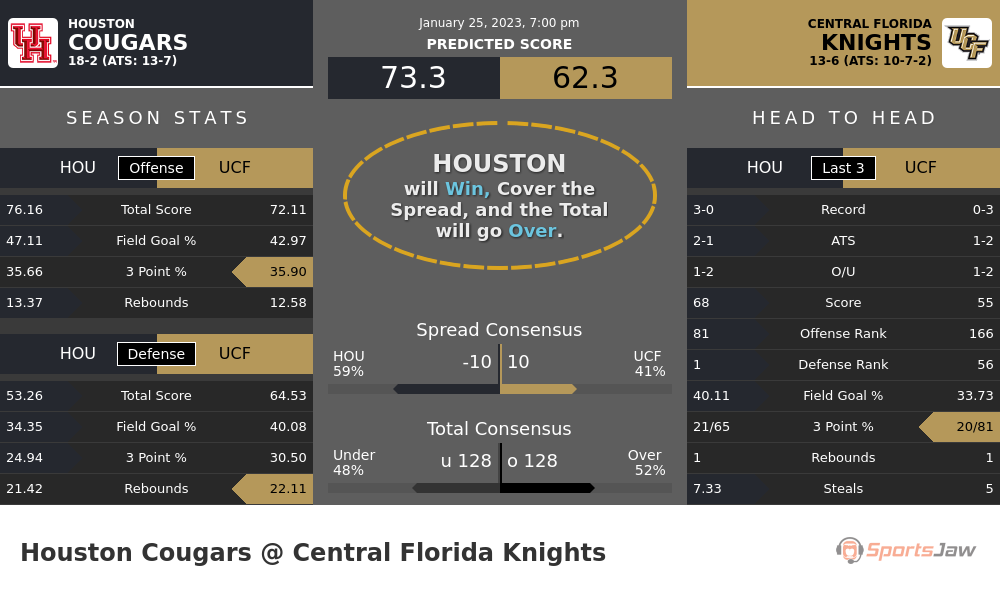 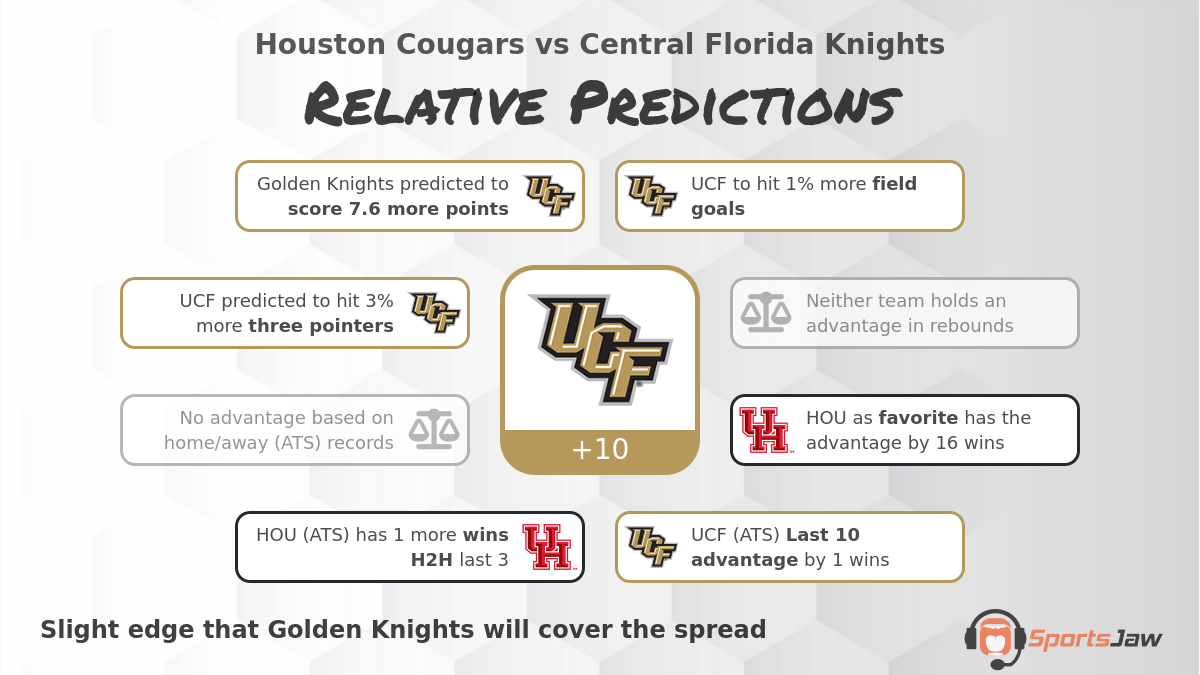 After crunching 8 data points, our relative predictions model has elected to not make a prediction on this game - view the Houston vs Central Florida infographic for details.