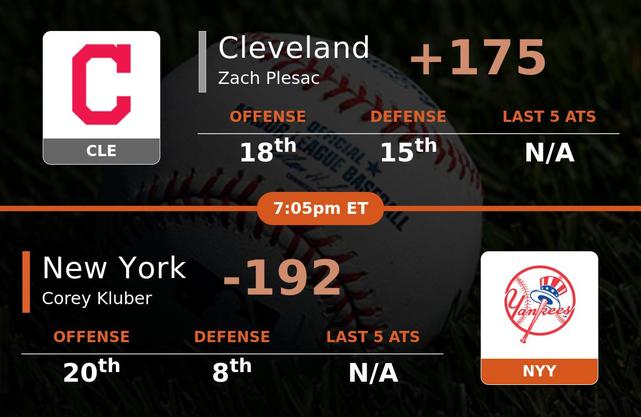 The visiting Cleveland Indians send 26 year old Zach Plesac to the mound in tonights matchup. Plesac's has an interesting blend of stats with an outstanding record (10-5) and WHIP (1.16) but with an inflated ERA (4.45). Advanced metrics show that Plesac excels at avoiding walks but not much else. In his past 100 batters faced, Plesac has hovered around league average. Cleveland is a below average offense ranked 17th in SLG and 21st in runs.

Yankees RHP Corey Kluber does a good job of mixing his pitches only slightly favoring his fastball over a curve, cutter and changeup. This has helped him be an above average pitcher in chase rate, whiff% and k%. In his past 50 batters faced, Kluber has been a below average pitcher in expected woba. The Yankees are ranked a disappointing 19th in runs but 9th in obp.

The moneyline is too expensive for my liking so I'm taking 1 unit on the under tonight.
Read More
$100 | UNDER 9
@JohnnyLikesCash

The Cleveland Indians travel to New York to face off with the Yankees for a weekend series between two AL teams. Zach Plesac will be on the mound going up against Corey Kluber.

Kluber has pitched well at Yankee Stadium this year in his 6 home starts pitching to a 2.78 ERA in the Bronx. The under has gone 5-1 in those starts as well. I like the under for tonight's play. I think Kluber will pitch well against his former team and Plesac has pitched better as of late going 4-1 in his last 5 starts.I expect a low scoring game tonight and will play the under.

Kluber could be hit hard

While the Yankees have managed to somewhat steady themselves this week, their four victories came against last place teams, and they still aren't playing particularly well at the moment. Cleveland isn't in playoff contention but has done enough to remain around .500, and will do enough damage against Kluber to at least keep that a one-run game.

After putting up some nice performances early in the season, Kluber has struggled since coming back from the IL with 11 earned runs allowed in 11.2 innings spanning three starts, and it's fair to wonder about the future for a 35-year-old who has dealt with so many significant injuries. There isn't as much support from the rest of the roster right now either, as the Yankees offense has been mediocre in the second half while the bullpen is down its best arm in Loaisiga with some other typical stalwarts struggling.

Plesac looks much better over his last four starts and might finally be in a rhythm following his injury, while the Cleveland offense has been serviceable over the past month with a 99 wRC+. The Yankees have been good fade material for large stretches of the season, and Cleveland has value on the run line against the struggling Kluber.

Pitcher Summary (based on last 3 games):

Betting Prediction: Cleveland will Win and the Total will go Over.

The Yankee Stadium has an open roof so weather should be considered for today's game. It will be Partly Cloudy with 59% cloud cover and a 7% chance for rain. The temperature is 73° with 81% humidity and winds at 9 mph NE.